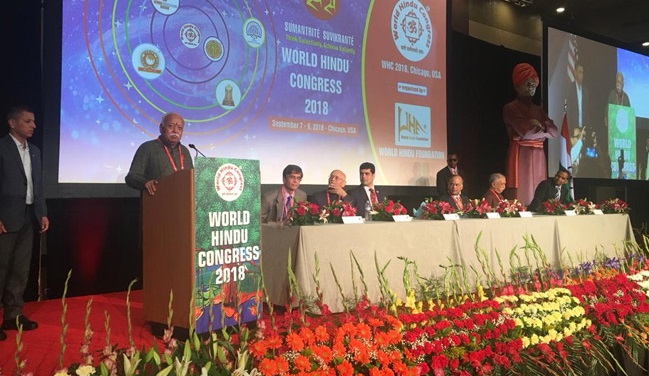 CHICAGO Sept 10: Delegates at the World Hindu Congress being held in Chicago received a sweet box in their welcome packet containing two ladoos — one hard and one soft.

The surprise sweet packets were distributed to convey the common perception that Hindu society is not united, according to the organisers of the event.

“The soft ladoo represented the status of Hindus today that they may be easily broken and swallowed while the future vision for the Hindu society should be like a hard ladoo — strongly bonded,” Guna Magesan, coordinator Hindu Organisational conference of the WHC, said Saturday at a panel discussion on Collective Efforts for Hindu Emergence.

Emphasising that Hindu religious teachings are for humanity, he said, schools and colleges in India should be opened to impart Hindu teachings.

On the resurgence of Hinduism, the spiritual head of the Chinmaya Mission, said, “Everything begins at home. When family breaks down, culture breaks down, and life of disharmony follows. We have to convert Hindus to Hinduism.”

He further said, “The spirit of unity does not mean all should be the same. In the midst of diversity, we must have a common goal of dedication.”

“We have to reform the education system that inculcates Hindu culture and religion. We have to re-discover the way the ‘Rishis’ taught the disciples in the ancient gurukul system.”

Swami Paramatmananda, secretary general of Hindu Dharma Acharya Sabha, said Hindus should think collectively not only for its own resurgence, but for the resurgence of the whole world.

“Society has a relationship problem, where one person is unable to relate to the life of another person,” he said.

Calling Hindus to address the ecological problems of the world, he said, “God did not create the world for man’s consumption. The responsibility lies on Hindus to protect the ecology.”

Sadhguru Dalip Singh of Namdari Panth told the Congress that Hindus and Sikhs can never be separated. The Guru Granth Saheb says that Sikhs should remain Hindus, he added.

He urged Hindus to stop using English to describe India and instead call it “Bharath”, and that Hindus who know Hindi should always speak in Hindi.

Decrying those who habitually blamed their motherland, he said one should instead find what is good in India and espouse it.

Madhu Pandit Dasa, chairperson of Akshaya Patra Foundation, ISKCON, said the different denominations of Hinduism are a strength rather than a weakness.

“There are common grounding principles in these denominations,” he said.

He drew attention to the declining birth rate among Hindus and said, “take pride in having more children”.

The second World Hindu Congress is being held here to mark the commemoration of the 125th anniversary of Swami Vivekananda’s historic speech at the Parliament of the World’s Religions in 1893 in Chicago.