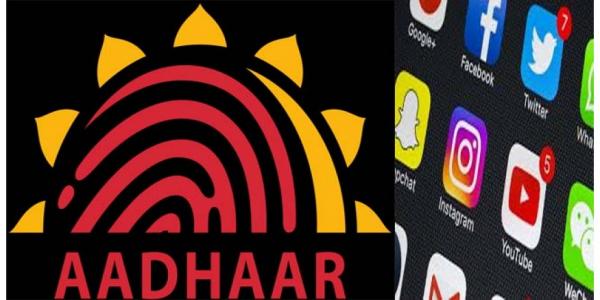 NEW DELHI Aug 21: The Central govt supported the stand of Tamil Nadu govt to link social media accounts with Aadhar number. The Supreme Court (SC) on Tuesday allowed the Madras High Court (HC) to continue hearing a plea which seeks linking of Aadhaar numbers to social media profiles such as Facebook and Twitter, but barred it from passing final orders in the case.
The apex court also issued notices to the Central government and other social media companies such as Twitter and Google, and sought their response on a transfer plea moved by Facebook.

US-based Facebook has approached the apex court seeking transfer of cases pending in different high courts to the top court, expressing inability to keep defending itself in the various courts.

On Monday, the social media company had said it was difficult for it to defend itself before high courts across the country. The high courts had given conflicting observations in the case, and it would be in the interest of justice if the apex court heard all the cases at one place, it said.

During the hearing on Tuesday, Facebook said the case and its outcome had huge ramifications and thus it should be heard only by the top court of the country.

Attorney General K K Venugopal, appearing for Tamil Nadu, however, said since the Madras High Court had already heard the case at length, it should be allowed to give a final judgment in the case before the apex court decided on it.

There have been several Public Interest Litigations (PILs) filed in the case, with the earliest being moved before the Madras high court in July 2018.

The petitioner, Antony Clement Rubin, had sought directions from the court to ask the government to make it mandatory to link Aadhaar or any other government authorised identity proof for authentication of social media profiles.

Other similar PIL sought that Facebook should seek some sort of government authorised identity before allowing any person to open an account on its platform.

The Madras high court, while hearing the petition, had observed the application to link Aadhaar with social media profile was dangerous as “it would affect the right to privacy of every individual”.

The high court had however agreed to hear the case and said that service providers such as Facebook and WhatsApp should make efforts to “provide adequate information to the investigation agencies”.

During the hearing on Tuesday, Facebook owned WhatsApp’s lawyer Kapil Sibal said an order by any of the high court to link social media profiles to Aadhaar numbers or provide information about the origin of messages on its platforms, despite end-to-end encryption feature, would have global ramifications and force the company to change the product globally.