LONDON May 1: Sivagiri Ashramam of UK, an affiliate centre of the famed Sivagiri Mutt in Kerala, was inaugurated in Enfield in the presence of dignitaries from Kerala and the UK.

The inauguration was held on Saturday 30th April 2022 at the St Ignatius College Turkey Street Enfield with a host of events from 12 noon to 8pm.

The inauguration was held under the auspices of Sivagiri Guru Dharma Pracharana Sabha Unit Reg 2020.

The aim of this ashram is to spread the teachings and principles of Sree Narayana Guru and to develop and nurture it as a place to practice yoga, meditation and other spiritual practices. The activities of the ashram will be carried out as per the guidelines of the Sivagiri Mutt.

The ashram will be built in such a place that all Gurudeva devotees in the UK can reach without difficulty. The formation of this ashram is being carried out by bringing together all Sree Narayana Guru organizations and other organisations that are collaborating with Sevanam UK. About Sivagiri Mutt
Sree Narayana Dharma Sanghom Trust, Sivagiri Mutt, Varkala is a spiritual order of saints and sanyasins founded in 1928 by Sree Narayana Gurudev, the greatest Saint and social Reformer of 19th centuary India has ever seen, Gurudev, is worshipped by millions in India and abroad as a prophet of peace, justice, light and hope for the downtrodden through his life, teachings and principles. The Mutt’s mission is to disseminate and propagate the teachings and principles of Sree Narayana Guru such as “One Caste, One Religion, One God for Man” and to do service to humanity as conceived by the Guru and perpetuate the monastic order of the members to achieve the objects of the Sanghom. 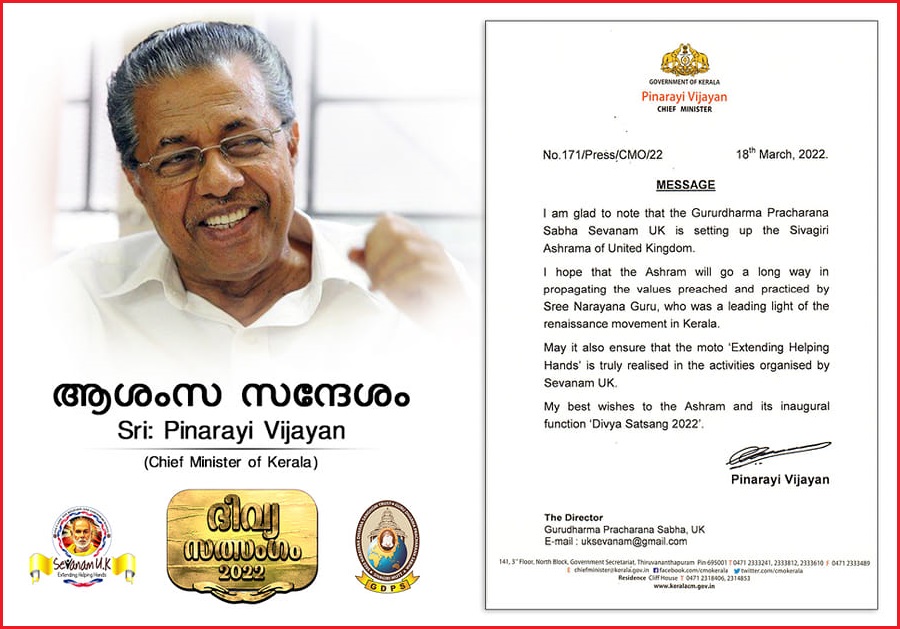 About Sevanam UK
Sevanam UK is a socio-cultural non-profitable charity organization formed by a group of dedicated philanthropists, working and settled in the UK. Their main objectives are to develop, publish, promote, encourage and educate ideas and visions of Lord Sree Narayana Guru among the members of the society, to extend an unconditional helping hand to assist the people and community who need support, especially from the UK, to facilitate the inquisitive people around the world to explore the supreme power of Guru’s philosophy and science and to assist parents to advance children’s cultural education, heritage, traditional values, art and science and thus play a role in their overall development.