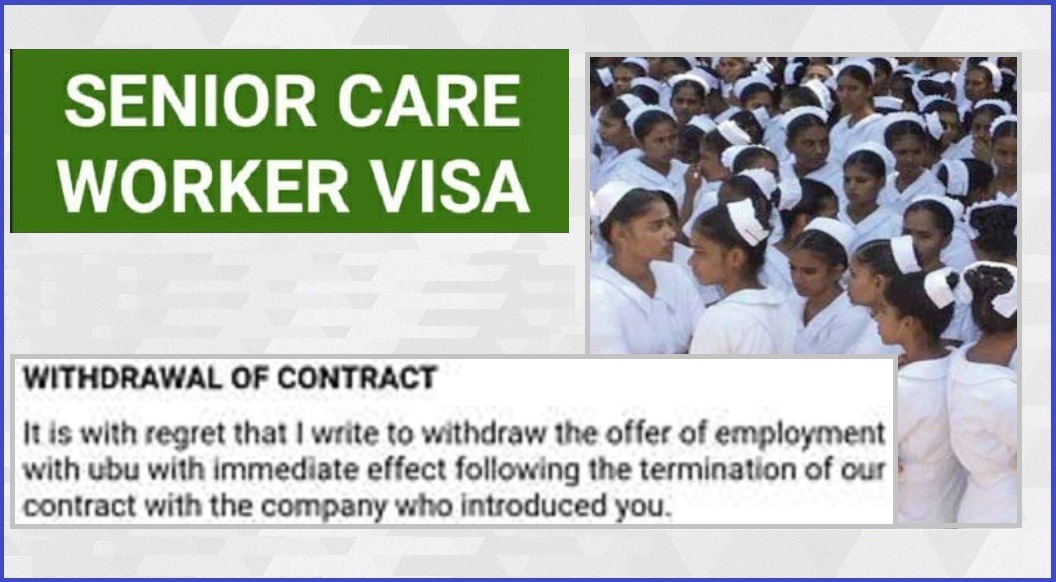 LONDON July 29: Around twenty-five senior carers, who were brought to the UK by a Malayalee healthcare recruitment agent have received letters from their employer stating that their offer of employment has been withdrawn, local reports said.

“It is with regret that I write to withdraw the offer of employment with you with immediate effect following the termination of our contract with the company who introduced you. We appreciate that this will be disappointing  but we believe it is necessary to comply with the Modern Slavery Act 2015”

1. You were introduced to us through a company called Maybee Healthcare Ltd (name changed). (We have made contacts with the Malayalee agency and awaiting reply)

2. A condition of our contract with Maybee was that they would:

require that each of its direct sub-contractors and supplier comply with all applicable anti-slavery and human trafficking laws, statutes, regulations from time to time in force including but not limited to the Modern Slavery Act 2015.

3. The meaning of slavery of servitude under section 1 of the Modern Slavery Act 2015 is recognised to include debt bondage i.e. forcing someone to work to pay off a debt. This is prohibited in the UK

4. We have discovered that (directly or indirectly) applicants have paid fees for services connected with recruitment to the UK of up to £10,000

5. We do not believe that to be appropriate. We believe it likely that some, if not all, applicants and/or their families will incur debt to fund those fees in return for promised work in the UK and it could take several years to repay it.

Nursing homes are asked to recruit overseas senior carers without any costs passed to the prospective job-seeker.

We have made contacts with Maybee Healthcare Ltd (not real name) and awaiting a reply.