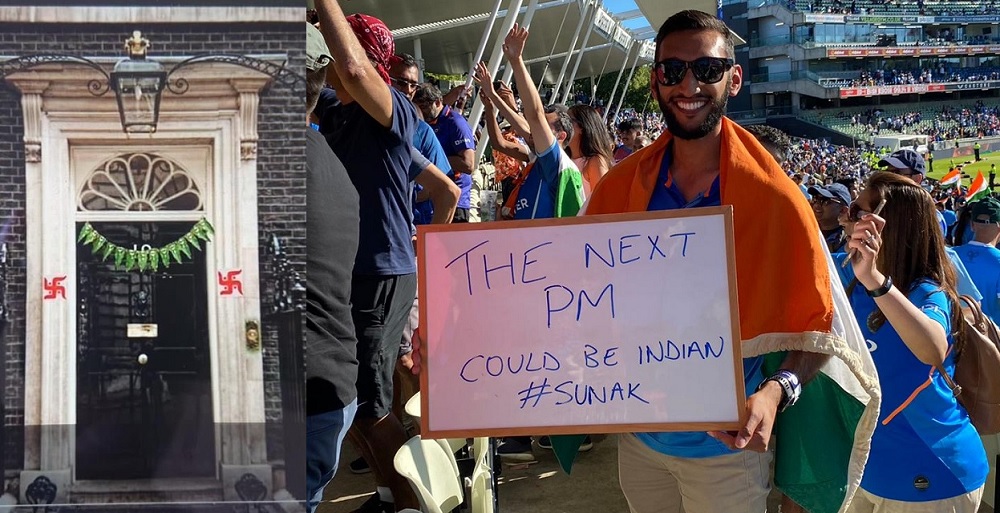 A supporter at the India Vs England cricket match last Saturday

LONDON July 13: Former Chancellor Rishi Sunak and Attorney General Suella Braverman are the two Indian-origin members of Parliament to make the initial shortlist of eight candidates in the race to replace Boris Johnson as Conservative Party leader and British Prime Minister at the close of nominations on Tuesday evening.

Mr Sunak, who formally launched his campaign earlier, remains the frontrunner in the race with reportedly the highest number of MPs behind him. “I am running a positive campaign focused on what my leadership can offer our party and our country,” the 42-year-old Conservative leader said at his campaign launch.

Earlier, Ms Braverman, 42, said she has “got the numbers” to make the leadership race ballot.

Ms Braverman, whose parents emigrated to Britain in the 1960s from Kenya and Mauritius respectively, has been Member of Parliament for Fareham since 2015.

Just as the nominations closed, the two Pakistani-origin hopefuls – former Health Secretary Sajid Javid and Foreign Office Minister Rehman Chishti – had withdrawn from the race, not having met the 20-MP mark. “There is an abundance of both ideas and talent in our party. One of the candidates will be given the honour of becoming Prime Minister,” said Mr Javid.

A second ballot on Thursday will narrow down the field further as candidates with the least votes keep getting knocked out. There is provision for further ballots next week if the race to get to the final two candidates does not conclude by the end of this week.

The deadline to narrow down the shortlist to just two remaining candidates is July 21, when the 1922 Committee Chair Sir Graham Brady will also seek an assurance that both finalists will remain in the race to face the wider party membership ballot.

The 1922 Committee, in charge of the timetable for the leadership race, has said that the new Tory leader will be announced on September 5 and address their first Prime Minister’s Questions in Parliament on September 7. After the field is whittled down to the final two candidates, the duo will tour parts of the UK for hustings to campaign the estimated 200,000 Tory party members who will then cast postal ballots for the winner based on a one member, one vote system.

The candidate who receives the most votes will win the race and be declared the new Tory leader and UK Prime Minister.

Meanwhile, reports said that Labour Party will put forward a motion for a no confidence vote in Prime Minister Boris Johnson’s government on Tuesday, with the vote expected to take place on Wednesday, a source in the party said.

A no confidence motion means that lawmakers from all the parties represented in parliament can vote on whether the government, under Johnson for the time being, should continue in office. If the government loses the vote, it could trigger a national election.

The vote is unlikely to be successful however. With the Conservative Party behind Labour Party in opinion polls and a leadership election underway, lawmakers from the governing party are not expected to decide to back a motion that could send voters back to the ballot box.

Johnson said last week he would step down after more than 50 government ministers and aides resigned in protest at his leadership, but he will stay on as leader until his replacement is elected in early September.

Labour Party had said they would put forward a vote if the Conservative Party did not act to remove Johnson earlier.

Industrialist Anand Mahindra is known for his interesting tweets. This time, he turned his attention to the ongoing political crisis in the United Kingdom, sharing a meme on 10 Downing Street, the official residence of the British Prime Minister. The photo shows the facade of the residence adorned with dry mango leaves and a Swastika sign (as a mark of celebration).

The future of 10 Downing Street? The famed British humour is now laced with Desi humour…😊 pic.twitter.com/rjkYPhWDGX