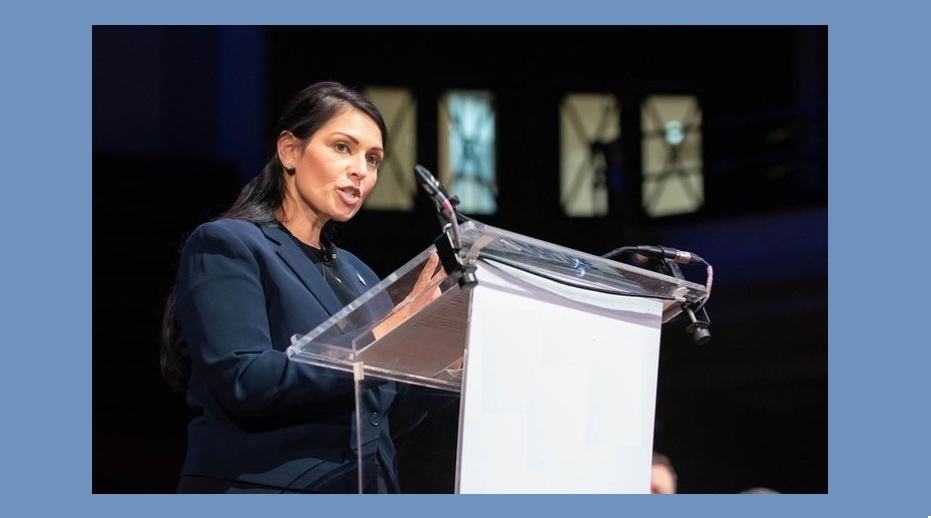 LONDON Sept 6: Priti Patel has decided to resign as the UK Home Secretary and plans not to serve in the cabinet of the newly-elected Prime Minister Liz Truss.

In a letter to outgoing UK Prime Minister Boris Johnson, Ms Patel wrote, “It is my choice to continue my public service to the country and the Witham constituency from the backbenches, once Liz Truss formally assumes office and a new Home Secretary is appointed.”

She congratulated Liz Truss on being elected as the country’s new leader, and promised to give her support to her as the new Prime Minister. “From the backbenches, I will champion many of the policies and causes I have stood up for both inside and outside of Government,” she added.

She expressed deep honour to have worked as the UK Home Secretary for the last three years. “I am proud of our work to back the police, reform our immigration system and protect our country,” she wrote.

“It has been a great honour and privilege to serve the country with you during your premiership,” Patel wrote for outgoing PM Boris Johnson.

Recalling Johnson’s contributions during his tenure as the PM, Patel wrote, “In July 2019, when you became Prime Minister, our political system was broken. Parliament was tearing itself apart as some MPs showed contempt for democracy and desperately tried to block Brexit.”

“You set out a clear plan to get Brexit done, broke the deadlock in Parliament, and secured a historic Conservative victory at the 2019 General Election, winning the largest share of the vote for a political party since Margaret Thatcher,” she added.

“Under your leadership, we have made our country safer, strengthened law and order, delivered our Manifesto commitments, and laid strong foundations for our successors at Number 10 and in the Home Office to build on,” Ms Patel continued.

Liz Truss was announced as the new head of the Conservative Party today. Forty-seven-year-old Liz Truss will become the third female prime minister of the UK.

She defeated former Chancellor of the Exchequer Rishi Sunak through a postal ballot of all Conservative members. Truss secured 81,326 votes while Mr Sunak got 60,399 votes.

“I am honoured to be elected Leader of the Conservative Party. Thank you for putting your trust in me to lead and deliver for our great country . I will take bold action to get all of us through these tough times, grow our economy, and unleash the United Kingdom’s potential,” Truss wrote on Twitter.

The Tory leadership race was triggered after Boris Johnson was forced to step down on July 7 following a series of resignations of cabinet members, who protested against his scandal-plagued leadership.

Rishi Sunak and Liz Truss rose to the Conservative ranks to end up as finalists for the contest for the post of UK Prime Minister. During nearly a dozen hustings and after a six-week long head-to-head competition, Liz Truss and Rishi Sunak had explained their long-term visions for Britain. Both contenders went through bouts of 12 nationwide events with the first bout in Leeds, Northern England.

Truss indicated that she will strongly push back against “identity politics of the left” as she has envisioned the legislation for single-sex spaces such as domestic violence shelters. Mr Sunak batted for cutting VAT to revive the country’s economic situation.

The Roadmap 2030 for India-UK future relations was launched during a virtual summit between the two countries in May last year. This Roadmap is for revitalised and dynamic connections between people, re-energised trade, investment and technological collaboration.

During her visit to India this year, Truss along with External Affairs Minister S Jaishankar expressed satisfaction with the progress achieved so far concerning Roadmap 2030 and agreed to further intensify efforts to deliver results in priority areas of trade and investments, defence, and migration.

Both sides appreciated the substantial progress made in the India-UK FTA negotiations with two productive rounds completed since its launch in January 2022. – ANI