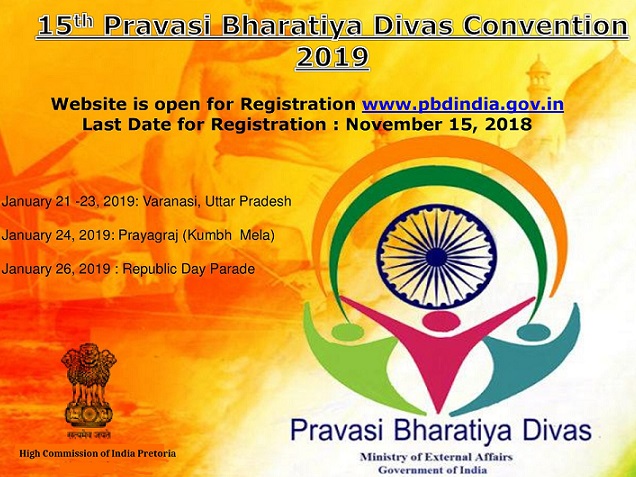 New Delhi, January 10: In a bid to strengthen the engagement of the overseas Indian community and reconnect them with their roots, the government of India organises the  Pravasi Bharatiya Divas (PBD) once in every two years.

The PBD conventions are being held every year since 2003. The PBD is being celebrated on January 9 every year to mark the contribution of Overseas Indian community in the development of India.

This year, India will celebrate the 15th PBD Convention in Uttar Pradesh’s Varanasi.

This year, the PBD celebrations will be held from 21 to 23 January instead of January 9 as larger diaspora community will participate in Kumbh Mela and Republic Day celebrations.

According to the MEA, the Convention will be held at Varanasi, Uttar Pradesh. After the Convention, participants would be given the opportunity to visit Prayagraj for Kumbh Mela on 24th January, 2019 and witness the Republic Day Parade at New Delhi on 26th January 2019.

The decision to celebrate PBD was taken after the recommendations of the High-Level Committee (HLC) on the Indian Diaspora set up by the government of India under the chairmanship of L. M. Singhvi (L M Singhvi).

On 8th January 2002, the then Prime Minister of India, Atal Bihari Vajpayee after receiving the report of the Committee, had announced the “Pravasi Bharatiya Divas”(PBD) on 9 January that year.

The day was chosen to mark the return of Mahatma Gandhi from South Africa to India in 1915.

The event has been organised every year since 2003 and is sponsored by the Ministry of Overseas Indian Affairs and the CII (Confederation of Indian Industry), initially sponsored by FICCI.

The occasion is marked by special programs to recognise the contributions of NRI/PIO individuals of exceptional merit, felicitate NRI/PIO individuals who have made exceptional contributions in their chosen field/profession (Pravasi Bharatiya Samman (Hindi: NRI/PIO Award)) and provide a forum to discuss issues and concerns of people of the diaspora.

Pravasi Bharatiya Divas Convention is the flagship event of the Government and provides an important platform to engage and connect with the overseas Diaspora.

The theme of PBD 2019 is “Role of Indian Diaspora in building a New India.” Reports inform that special arrangements are also being made for participation in Kumbh Mela and Republic day parade.

The day commemorates the return of Mahatma Gandhi from South Africa to Mumbai on 9 January 1915 and led India’s freedom struggle and changed the lives of Indians forever.

During the Convention, selected overseas Indians are honoured with the prestigious Pravasi Bharatiya Samman Award to recognize their contributions to various fields both in India and abroad.