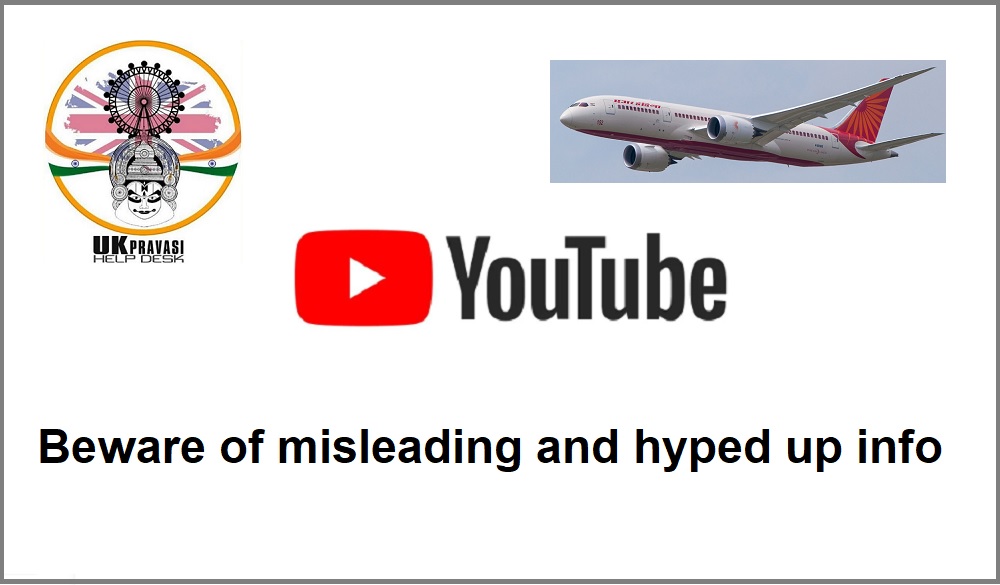 LONDON Jan 19: With the influx of students and healthcare workers from India, there is a spurt in number of Youtubers who have sprung up like mushrooms in the last couple of years. These YouTubers are mostly thriving on selling hyped up information using fake, clickbait and sensational thumbnails and images to mislead viewers into believing that the news shared by them is authentic.

UK Pravasi Helpdesk, a Whatsapp group based in the UK, which was formed in early 2020 with more than 6000 members in total, has now taken up this matter by writing to V Muraleedharan Indian Minister of State for External Affairs & Parliamentary Affairs asking him to streamline or censure such YouTube channels so that hundreds those who are looking to migrate from Kerala can be saved from falling prey to illegal recruiters or falling to misleading messages from these YouTube channels.

The main reasoning behind such an effort by the UK Pravasi Help Desk is to bring to the attention of authorities in India the excruciating circumstances of some of the Keralite students and families who have arrived in the UK in recent months.

The letter said to the minister read as below:

“A vast majority of them are victims of the most avaracious agencies and YouTube influencers beguile presentations and promises. We were right in believing that the new September in-take would be overshadowed by the imminent publication of a massive series of false stories and misleading information on the vlogs and videos presented by the YouTubers and agencies.

“Anticipating a bright future and a decent living most of the students and families were forced to sign up for money exchange contracts, which inevitably eats into their owns savings and being debt ridden. On arrival to the UK, the reality gives them a shock and most of them end up in a quagmire, struggling to find an accommodation and a job to survive and provide.

“Recent media releases coincide these facts. In the UK only OISC registered immigration advisers or solicitors, barristers and members of approved professional bodies are legally able to provide immigration and and services to the public.

“We would appreciate it if your organisation can make arrangement for an awareness class to the families of the aspiring students for the September-2023 in-take. We as a community are happy to provide any support from our end through a dedicated help line to answer queries and impart credible information”.

In the UK only Office of the Immigration Services Commissioner (OISC) registered immigration advisers or solicitors, barristers and members of approved professional bodies are legally able to provide immigration and and services to the public.

The letter is sent to authorities in India as many of the YouTubers have registered them in India.

2 thoughts on “Keralites in UK want end to spread of misleading and hyped up info by YouTubers relating to jobs, life in UK”