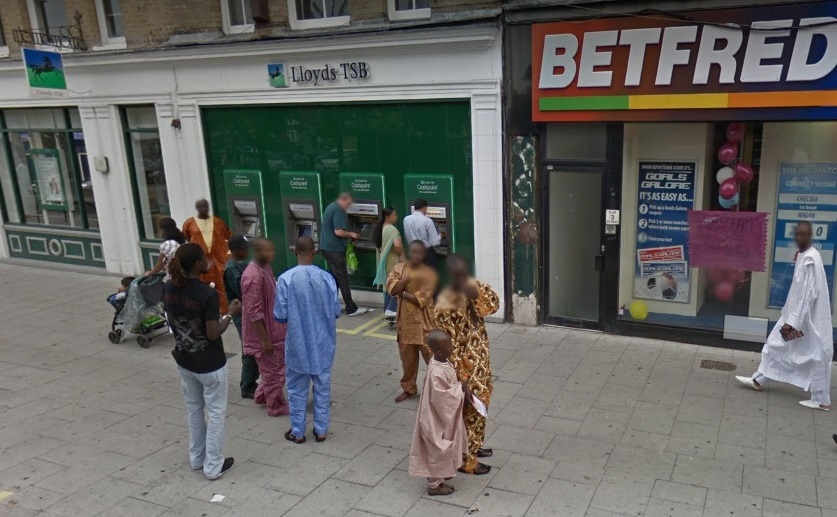 Google image of the Lloyds Bank in East Ham cashpoint where the incident happened.

LONDON Nov 15: A Keralite student who arrived in the UK only a month back has lost £500 while trying to retrieve the money from her Lloyds Bank ATM cashpoint in East Ham High Street. The theft was committed by an unknown person while the student was about to get the money out.

The alarming fact is that the theft happened just outside the Lloyds Bank where there were so many persons at the time of the incident and also with several CCTV cameras in the vicinity.

Ranjitha is a Keralite student at Greenwich University. Ranjitha, native of Thodupuzha, narrated the incident to this website as below.

“I am staying in a shared flat, alongwith my friend in East Ham. As my rent was due my landlord asked me to give him the rent money and thus I agreed to go and get this for him at the ATM cashpoint in East Ham High Street just in front of the Lloyds Bank.

“While I was at the ATM Cashpoint outside Lloyds Bank I was approached by a tall white male who is big in size, most probably of Eastern European/Romanian origin, who speaks English but not in the native English accent.

“While I was about to withdraw the money he began having a conversation with me in regards to issues he had in regards to Card getting stuck in the machine etc. I became nervous as I had already put my card in and this man was very much next to me and barged in took control of the whole situation.

“It was all happening very quickly. I was all very much caught off guard as I have never been to a cash point before as it was my first time when I had to activate my card.

“Suddenly, the next moment I see is that cash began coming out and in a flash he took the money and ran away. I just stood there shell shocked not knowing what to do with such a over powering man who just took control of the whole situation. I was shocked and couldn’t utter a word and do anything.

“The people behind me were shouting and telling me that he has run away with the money but I was helpless as he had already disappeared.

“People ask me why I went on my own if it was first time that I was using the card. It was the pressure from my landlord who insisted that I get the money for him then and now and thus I decided to go on my own.

Ranjitha has reported the incident to the Police who registered the case and  given a Reference Number.

Ranjitha has now lost a month’s rent. This is her education loan which she had to use to manage her daily living expense for the course period.

Ranjitha has now written to her MP requesting for the Police and Lloyds Bank to coordinate to nab the culprit and get her money back.

Occurrence of such incidents are becoming common place with the Police issuing several notifications to beware of fraudsters while using ATMs.

This will prevent any prying eyes or hidden cameras seeing your PIN.

Don’t get distracted. Be particularly cautious if seemingly well-meaning strangers talk to you or offer to help while you’re using the ATM.

If they’re persistent, simply cancel the transaction and discreetly put your card away. Fraudsters sometimes fit devices to cash machines that trap your card, or ‘eat’ it, which they then retrieve as soon as you’ve left the area.

If an ATM eats your card for any reason, report it to your card company straight away, ideally using your mobile while you’re still in front of the machine.

Make sure you store your card company’s 24-hour contact number in your phone.

Once you’ve completed a transaction put your money and card away before leaving the cash machine.

Destroy or ideally shred your cash-machine receipts, mini-statements or balance enquiries when you’ve finished with them.

Also Read: Cash machine fraud: Report to your card company straight away if ATMs trap your card or ‘eat’ it