From a humble beginning, Lijo started his career in the hotel industry as a kitchen assistant with the kitchen of the Armed Forces club in Abu Dhabi. From there Lijo harboured a desire and passion to pursue a career as chef. However, he realised that he need to attain an international exposure and thus he decided to further his studies in the UK.

Thus, Lijo Louis arrived in 2019 to enhance his cooking skills by doing BSc Culinary Arts Management at the Ulster University. 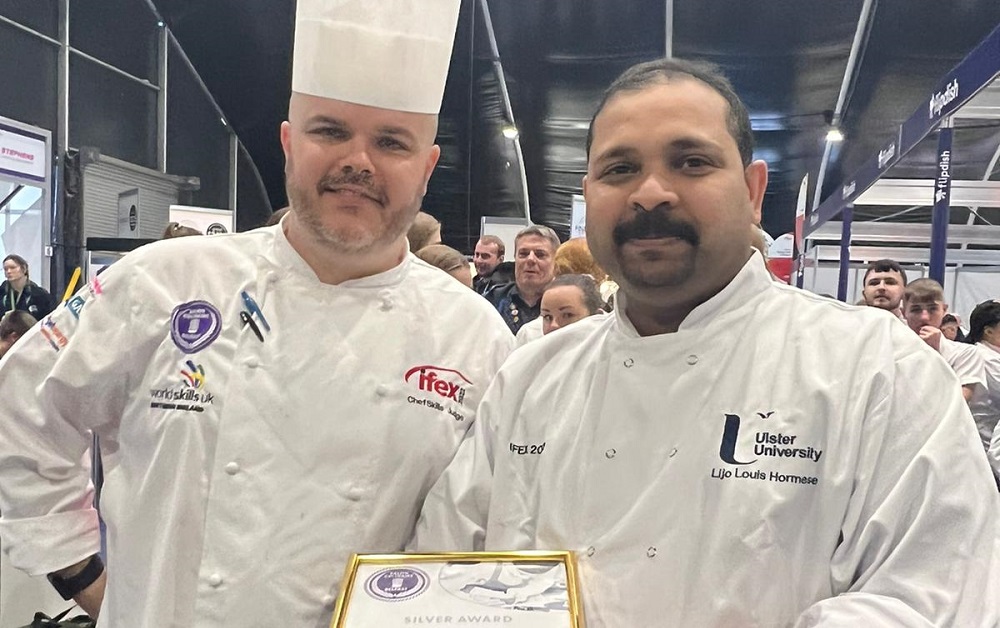 Taking into consideration Lijo’s qualification from Chefs Institute Of Hotel Management in Ettumanoor he was given a year off from his four year degree course. Lijo is in his final year and will be completing his degree this year.

For Lijo, its all happening for him. He arrived as a student and today he was able to win one of the prestigious awards which is sure to provide him a launching pad for a career which he holds close to his heart.

Lijo lives in Belfast and his wife Rani Lijo and two children Lear 12 and Lyra 9, is residing in Thiruvananthapuram, Kerala.

Competitor Chef Lijo Louis was assisted by a commi chef for cleaning and organisational purposes only. Lijo was assisted by James Joyce as commi chef, who is another Keralite student at the same university. No cooking will be permitted by the commi chef but they will receive a certificate of participation. Thus upcoming James Joyce will also receive the honour with Lijo. “It was a helping hand to another Keralite”, said Lijo. The prestigious two hour competition was open to all students studying for a recognised cookery qualification or in the industry. Competitors were required to devise and submit a menu for a 2-course meal – main course and dessert for 2 covers and forward to the organisers. Strict regulations have to be followed by all the competitors before submitting their respective menu to the judging panel. The prior condition was the maximum use of Northern Ireland products. Showcase the chefs kills.

Lijo’s competition menu was made with a fusion of European and traditional Indian cuisine. Locally found Northern Ireland Seabass was used for main dish as only locally sourced could be used for the contest. This was marinated with a herbal paste accompanied with seasonal yogurt (moru curry) with beetroot pickle and Hasselback potato.

The ingredients chosen for preparing dessert was the seasonal fruits such as bramley apples and rhubarb. Clandeboy yogurt (locally produced diary) was the main ingredient for the panna cotta and mixed yogurt, lime form for garnish.

Lijo used his European exposure to use to his advantage his Indian heritage to win the coveted prize. It is time and again proven that your culture and tradition stands tall at any testing times for your to achieve great laurels.