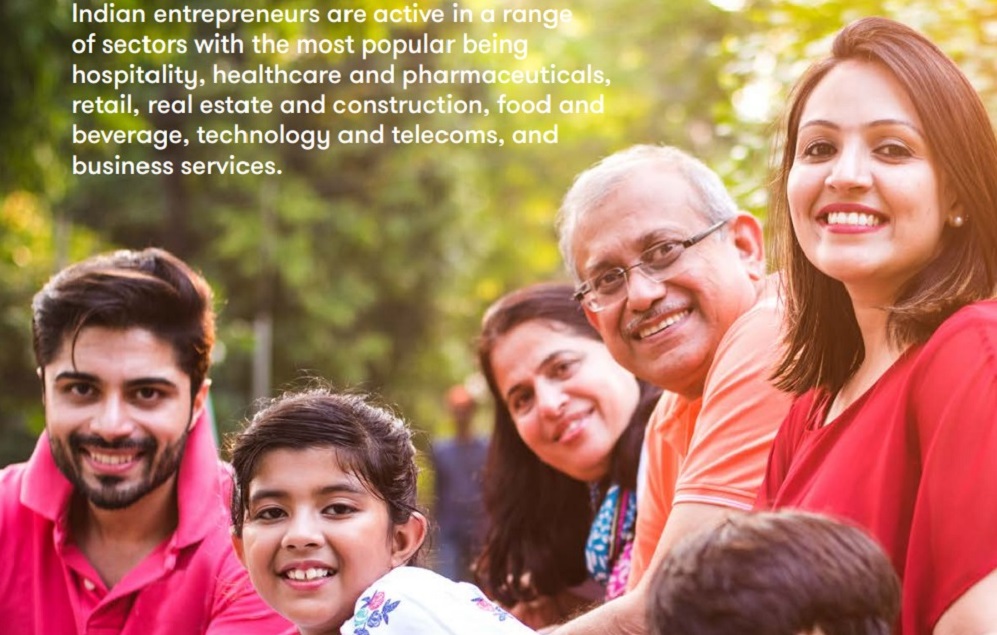 LONDON March 16: The importance of family support, the determination to succeed against all odds, a strong work ethic and optimism for the future are among the factors identified behind the success of the Indian diaspora in the UK, according to new research released in London.

‘India in the UK: The Diaspora Effect 2.0‘, compiled by Grant Thornton and the Federation of Indian Chambers of Commerce and Industry (FICCI) and launched at the Indian High Commission in London on Friday, features a series of interviews with leading diaspora entrepreneurs and professionals who have made a contribution to the India-UK relationship.

While estimated at 1.5 million based on the last census, the report notes that the Indian diaspora in the UK is now probably closer to 1.7 million.

“The diaspora is at the core of the India-UK relationship, the bridge of steel – the living bridge as our Honourable Prime Minister warmly describes,” said Gaitri Issar Kumar, the Indian High Commissioner to the UK, at the launch event at India House.

“As the envoy of my government in London, it is my endeavour to enhance these strong links through outreach and engagements across the UK; as we celebrate 75 years of India-UK relations, I call upon the diaspora to keep the aspirations high as we work together to reinforce our excellent ties at all levels,” she said.

Baroness Usha Prashar, the Indian-origin peer who is chair of the FICCI UK Council, highlighted the role of the youth in enhancing the bilateral relationship.

“Today, the Indian diaspora is one of the largest migrant communities in the UK. Indian diaspora youth plays an indispensable role in innovation and new technologies, at a global level. We need to motivate them to devise innovative solutions to local problems in India,” she said.

The 2022 report builds upon the inaugural ‘Diaspora Effect’ report launched in 2020, which had identified approximately 654 diaspora-owned or diaspora-led companies with an annual turnover of GBP 100,000 or more across the UK.

Based on its research at the time, these companies had a combined annual turnover of at least GBP 36.84 billion and provided around 174,000 jobs in the country.

“With this follow up report, we wanted to take a much more qualitative approach through a cross section of interviews,” said Anuj Chande, Partner and Head of South Asia Group at Grant Thornton.

“As India becomes an increasingly important force globally, and the UK voices its desire to strengthen its long-standing ties with India, the diaspora is perfectly positioned to bolster the strength of the connection between the two countries and continue to contribute to the economic development in both countries,” he said.

Referencing the company’s recent ‘Business Outlook Tracker’, Grant Thornton finds that around 65 per cent of UK business leaders believe that a free trade agreement (FTA) with India would encourage their business to explore more opportunities in the Indian market.

The second round of India-UK FTA negotiations are set to kick off between officials from Monday.

“India is already an important partner for the UK, so an FTA is a natural next step to further strengthen the relationship,” added Chande.

The diaspora report is divided across the key sectors of healthcare; food and beverage; hospitality and real estate; pharmaceuticals and life sciences; technology, media and telecoms; retail; and financial services.

It includes interviews with first generation UK-based entrepreneurs such as hotelier Surinder Arora and fintech pioneer Rishi Khosla as well as second generation business chiefs such as Leena Malde and Akash Mehta.

The report also throws up some of the changing dynamics and challenges within the community, such as the complexity of succession planning and inclusion and diversity as Indian-origin businesses transition from the first to second generation. – PTI