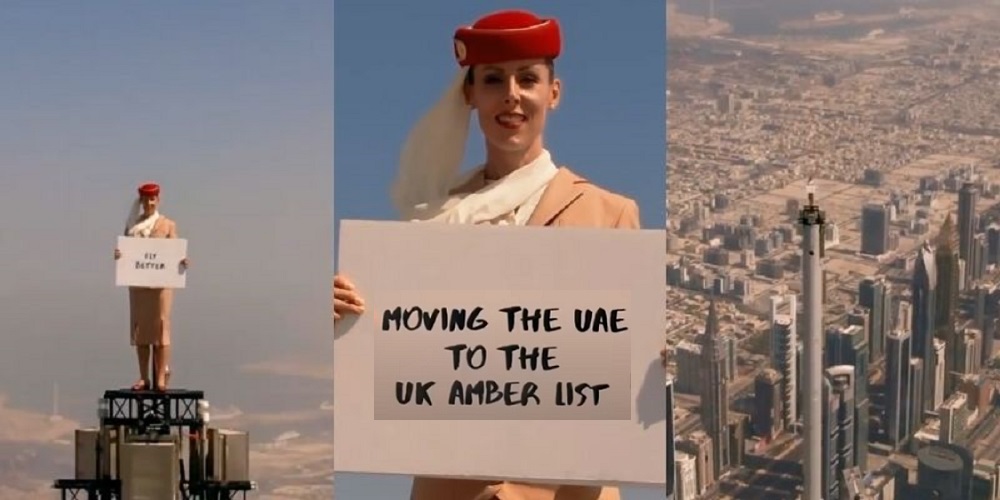 DUBAI Aug 9: Following the news of UAE being removed from the UK’s red list would have come as a sigh of relief for many. In celebration of the news, making travel easier for many UAE residents who are UK citizens, Emirates Airline shared a video stating they were “on top of the world” over the change.

The 33-second video advert opens with a close-up shot of the flight attendant holding message boards that read: “Moving the UAE to the UK amber list has made us feel on top of the world.”

The advertisement, which was released to celebrate the decision allowing quarantine-free travel between Britain and the United Arab Emirates, was shot without the use of a green screen or special effects, according to the carrier, the Khaleej Times reported.

The 33-second promotional video titled ‘We’re on top of the world’, which has now gone viral, shows a woman dressed as a cabin crew welcoming passengers back to Dubai after it was added to UK’s amber travel list.

This commercial, which has gone viral on social media last week, features UK stuntwoman Nicole Smith-Ludvik. The professional skydiving instructor has joined an exclusive group of people who have stepped atop the world’s highest skyscraper, which stands at 828 metres.

The commercial garnered a lot of positive feedback from people around the world. Netizens were stunned, and they couldn’t believe what they were seeing.

In response to several questions on how it was really made, Emirates on Monday published a behind-the-scenes video of the commercial, confirming that Smith-Ludvik did indeed stand atop the Burj Khalifa for the commercial.