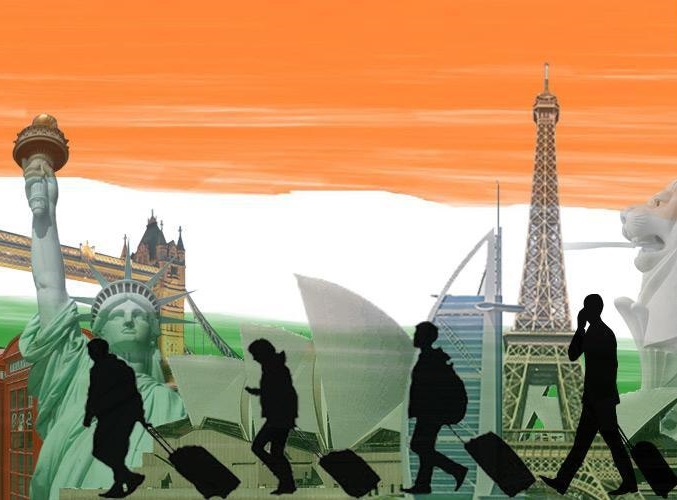 Thiruvananthapuram Sept 21: The Gulf job boom is on the wane for the average Keralite as noticed in falling emigrations and rising return migrations, indicating the last phase of the long history of migration from the State to the Middle East.

But, with the recent devastating floods, and the massive loss of physical capital and land value, migration can be conjectured to increase at least in the short run.

The importance of emigration for Kerala could not be more now than ever, as pointed out by Kerala Migration Survey (KMS) 2018, undertaken by CDS team, led by Prof S Irudayarajan.

The top destination is the Gulf, accounting for 89.2 percent of the total migration. The remaining 10 percent of the emigrants is concentrated in other countries, including the USA, UK and Australia.

The decrease from 2016 to 2018 for the Gulf has been slight, with a small decline for UAE. But compared to last five years, the emigrant population is showing a significant decline.

There is no doubt UAE is the favourite destination for Keralites from the beginning and 2018 also not different from that. About 1.89 million emigrants are residing in the Gulf countries.

The number of Non-Resident Keralites was 34.17 lakh in 2018 and 36.52 lakh in 2013. An NRK is a person who had emigrated from Kerala at any time; one who is either an emigrant or a return emigrant.

24 out of 100 households in Kerala have migrants. Malappuram has the maximum proportion, Ernakulam the least. Malappuram leads with 42.1 followed by Kannur 38.8 and Kollam 32.8.

14 out of 100 households in Kerala have return migrants with a maximum of 32.1 at Malappuram to the lowest 2.1 at Idukki. Kasaragod with 28.4 and Kollam with 22.6 are behind Malappuram.

Hindus dominate the population but Muslims are over-represented in terms of emigration. About 42 per cent of emigrants from Kerala are Muslims followed by Hindus 35 per cent.

The proportion of Christians at 24 per cent among emigrants has remained constant between 2013 and 2018. The increase in emigration was only among Muslims compared to other two religions during 2013-2018.

Decreasing emigration from Kerala can be due to cumulative effects of decreased the population in the migration-prone age group (15-29 years) owing to demographic change. Kerala attained replacement level of fertility in 1987. Since then, working age population in Kerala has grown at a decreasing rate.

Wages in the Gulf economies have been on a decline, leading to lower savings for emigrants. Wages in the domestic economy have increased and city-based development and opportunities in the informal sector have increased as a result of which people tend to stay back.

The price of the oil on which the Gulf economy is based has been declining since 2010. Although the last one year has seen a slight increase in oil price, the growth of the gulf economy has suffered a major setback.

The nationalisation policies in the GCC economies are not conducive for non-nationals. Policies like Nitaqat and family taxes impose a huge burden on these emigrants. Decades of investment in education has made Keralites skilled.

The successful Malayali emigrants and the influential diaspora are a major support for the state at this time of need. However, it is obvious that the long-term future of the state of Kerala is going to be less dependent on emigration and remittances.

With an unfavourable demographic dividend, it is impossible for Kerala to regain the dominance it had in migration to the Gulf.

Although, there is still a possibility of improving skilled migration to the developed nations in the West, recent international events of cultural backlash such as Brexit and the Trump presidency have made it harder in general.

Around one-fifth of the return emigrants had some kind of diseases or accidents while abroad. Among them one-fifth had back pain or body pain, having worked in shops or construction sites.

About 12.4 per cent returnees had met with accidents while working in construction site or workshop. Allergy, diabetes and kidney problem are other major diseases return emigrants have brought from abroad.

Meanwhile, remittances to the state have increased as Keralites in the Gulf have climbed the social ladder and earn higher wages, allowing them to remit more.

The share of remittances as part of NSDP was 19.3 percent.

India is the largest migrant source country as well as remittance receiving country in the world. In 2017, there were 16.6 million Indians living abroad (UN, 2017). According to the World Bank Migration and Development Brief 2018, India received USD 69 billion in remittances.

The depreciating value of rupee is considerably a positive effect on increasing remittances to India.

KMS 2018 -January 1 through March 31, 2018- is the eighth in the series of a migration monitoring study undertaken by the Centre for Development Studies during the last two decades.

KMS 2018 was financed by the State Government, Department of NORKA, Research and Empirical Analysis of Labour Migration of Interdisciplinary Centre for Innovation Theory and Empirics of Columbia University, USA, World Bank, and the World Economy Programme of the CDS.