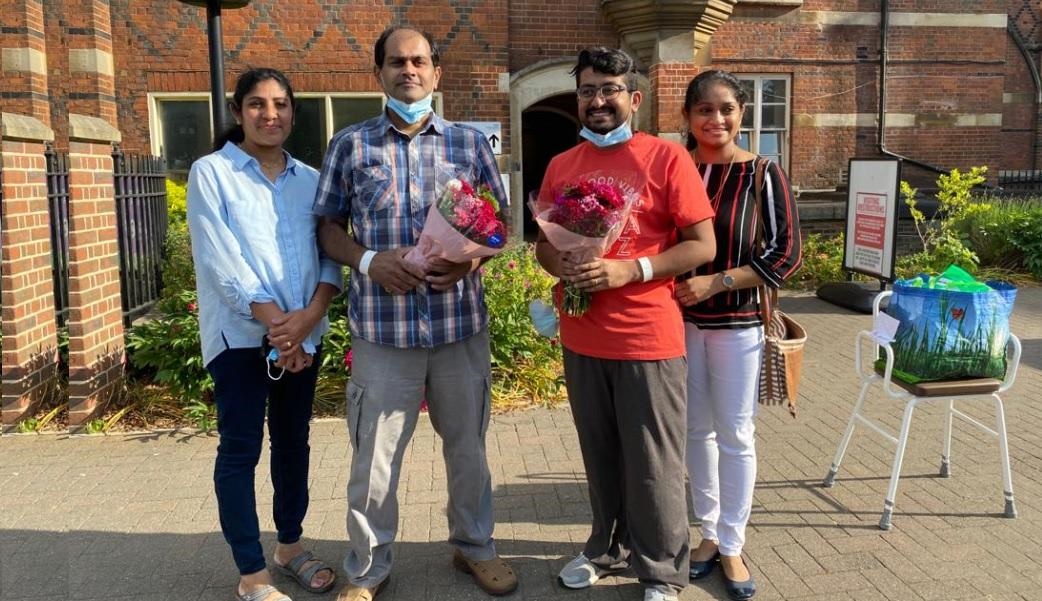 LONDON June 6: When the coronavirus infection hit the United Kingdom, the Malayali population in the UK also had to fear it. Malayali doctors and nurses are engaged in the UK’s fight against COVID-19.

Many are affected and during this battle, we lost some of their lives too. The latest news updates show, a second wave of coronavirus may hit the whole Europe in the coming winter.

While going through the hardships during this pandemic, this is a joyful news for all Malayalis in the UK. Two Keralites from the Winchester-Andover city area recovered completely from the coronavirus and joined back with their loved ones yesterday. More specifically saying, it was a second birth for both.

Hundreds of Malayalee families reside in the Winchester-Andover area and many were tested positive. Most of them recovered without much complications but things were opposite for Gini Varkey and Roychan Chacko.

Life was at stake for both at one point of time but the exemplary efforts in treatments given by the staff of NHS, Winchester, and the prayers of their family members and other friends gave them the new life.

The Winchester-Andover Malayali associations gave them an open-arm welcome and was a moment to celebrate for every single person.

Gini spent 29 days in the hospital and his condition gone worse, making the staff to give him ventilator support. Gini’s wife Sarah and their only daughter were with him throughout the period. Roychan had to spend 58 days in hospital and multiple times, his condition became worse.

He had to be in ventilator for several days. The staff and family members started losing hope except his wife Liji, who is a nurse too. It was her hopes, and strong determination in bringing him back, failed the coronavirus.

Roychan from Ambalapuzzha back in Kerala was infected by the end of March. The family followed the guidelines given by the NHS and treated at home, but later got admitted in the hospital after showing struggle in breathing.

Liji and the two daughters were confident enough, continuously prayed to God for his life. Things got worse, and the staff tried to transfer him to the ECMO (Extra Corporeal Membrane Oxygenation) machine.

They had a discussion with the authority of St. Thomas Hospital, London. Considering the availability of the ECMO machine and the number of days Roychan spent in ventilator, the staff from St. Thomas Hospital had to deny their request.

Roychan continued living with the support of ventilator.

On 14 th April, Liji received a call from the hospital, the staff asked her to meet her husband for one last time. She met her husband and the Malayali priest who accompanied her, started giving him the Last Sacraments.

Staff informed her that Roychan can no longer take the ventilator support, all organs are damaged and its time to say goodbye.

For a moment, Liji felt the whole world going upside down, but the decision taken by her to keep him in ventilator and give all the treatments, resulted in the re-birth of Roychan.

He started responding to medicines, it was an unexpected recovery, can be termed as a ‘medical miracle’.

After spending 32 days in ventilator and total 58 days in hospital, Roychan returned to his family and friends with a complete recovery yesterday.

Friends and family were eagerly waiting on roads with flowers and placards for Roychan’s and Gini’s return. The video of their return has been circulated and seen by thousands of Keralites through social media.

The UK Malayali population attained the status of a prominent Asian community. Thousands of doctors and nurses from Kerala have become the backbone of several NHS trusts.

Recovery of Roychan and Gini had given hopes and happiness among the community.