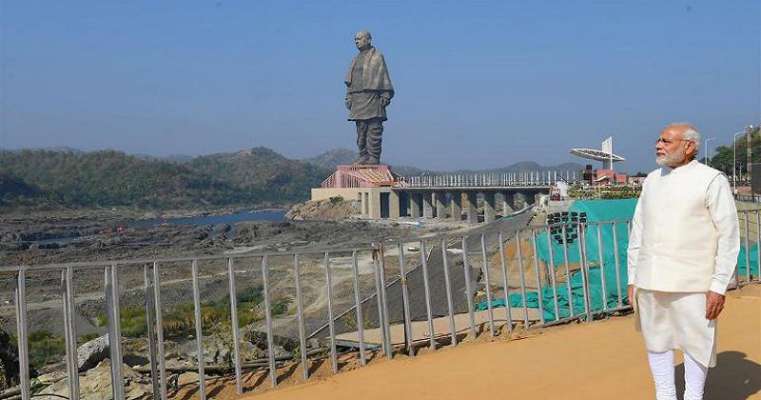 KEVADIYA: Standing on Sadhu Bet, an islet near Sardar Sarovar Dam, the ‘Statue Of Unity’ in Narmada district of Gujarat is expected to be a major tourist attraction.

The statue, inaugurated by Prime Minister Narendra Modi, is believed to be the world’s tallest monument and is expected to attract around 10,000 tourists daily, a state government official said.

At 182 metres, the statue of India’s first home minister Sardar Vallabhbhai Patel is twice as tall as the Statue of Liberty in the US.

Built with cement, steel and an outer bronze cladding, the statue, which has cost Rs. 2,989 crore, has several attractions for tourists. The nearest major town is Vadodara, 100 km away.

A visitor can take a lift installed inside the statue which runs at a speed of 4 metres per second to reach a viewers gallery at a height of 135 metres.

The gallery will offer scenic vistas of the river Narmada, the dam and the surrounding Satpura range of hills, a state tourism department official said.

A museum and exhibition hall have been constructed inside the gigantic structure, depicting the life and times of India’s ‘Iron Man’.

The tourism department has also constructed a guest house, ‘Sreshtha Bharat Bhavan’, where tourists can stay.

There will be charges for visitors: Rs. 120 per person for viewing the statue from outside, Rs. 350 for visiting the viewers gallery at 135 metres.

Two Tent Cities with a total of 250 tents along two lakes near the dam, equipped with modern facilities, are also being touted as a major attraction, where one can camp in a natural environment.

Spread across 70,000 square metres, the Tent Cities will run on green energy, said the official.

A 17-kilometre long ‘Valley of Flowers’ is being developed along the banks of the river near the statue.

An area of 240 hectares has already been developed in the first phase of Valley of Flowers project, the official said. It will feature five nature trails for tourists.

A ‘Wall of Unity’ has also been constructed using the soil collected from across the country under a campaign launched by PM Modi in 2013.

A release from Gujarat chief minister’s office said the monument will be open for tourists from tomorrow.