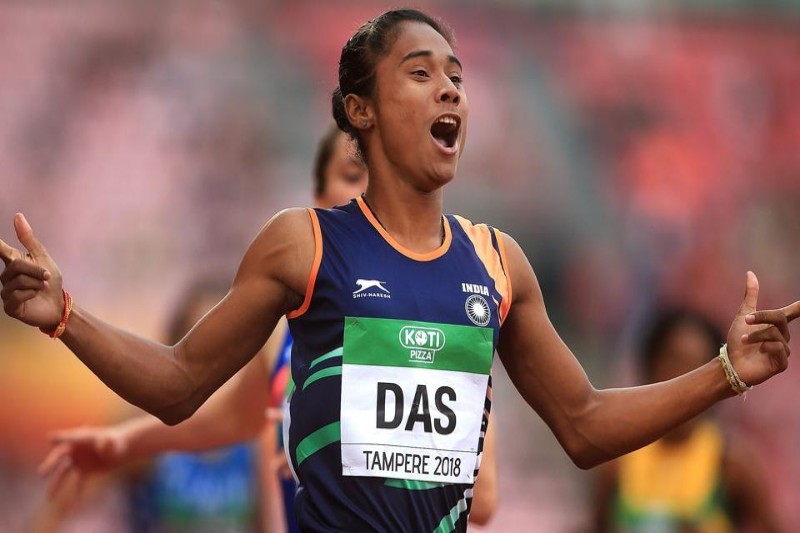 FINLAND July 19: Much before the Assam Government had announced Rs 50 lakh as cash award for athlete Hima Das, India’s latest sensation on the tracks, for winning a gold medal in an IAAF track event abroad (the first by an Indian), a small group of Indians living in Finland had made up their mind to award Rs 1 lakh to Assam-born Hima.

A report appearing in the The Times of India stated that members of the Punjab Cultural Society and Punjab Sports Club in Helsinki were “moved” by the 18-year-old’s “monumental effort” and soon they were exchanging messages with each other on their WhatsApp group – eager to show their “gratitude” to this farmer’s daughter from a remote village in Assam who set the track ablaze at Tampere in Finland recently.

“Let’s do something for her,” Vicky Moga, who runs the Warriors Hockey Club in Helsinki, initiated the chat. The report further quoted Moga as saying, “Within 10 to 15 minutes, we raised 900 euros, and soon touched our target of

He further added, “We wanted to honour Hima Das not only as her fellow Indians, but because she achieved the gold medal here in Finland, which is our home now.” Soon, the group of Indians drove over from Helsinki to Tampere over the weekend and sought an appointment with Das and also the legendary PT Usha, who was also in Finland as part of the coaching staff.

The Punjab Cultural Society and Punjab Sports Club members will deposit Rs 1 lakh directly to the sprint queen’s bank account. “We want to ensure that the amount reaches directly to her. So, we have decided that we will transfer it to her personal bank account,” said Vicky.

Hima said that she was “overwhelmed” by this gesture of the said group. The 18-year-old from Dhing in Nagaon district of Assam had scripted history last Thursday by clinching the 400 m gold in Tampere clocking 51.46 seconds – thus becoming the first track athlete from the country to win a gold medal at the world level.

Said the Deputy CM in a tweet, “The prize money is in recognition of her grit and perseverance and as a token of appreciation for becoming the first Indian women to win gold at the U-20 World Athletics Championships. The prize money has been awarded on behalf of Sri Siddhartha Academy of Higher Education.”

The Karnataka Deputy CM was an athlete in his younger days and also had a reputation for being a good runner himself.