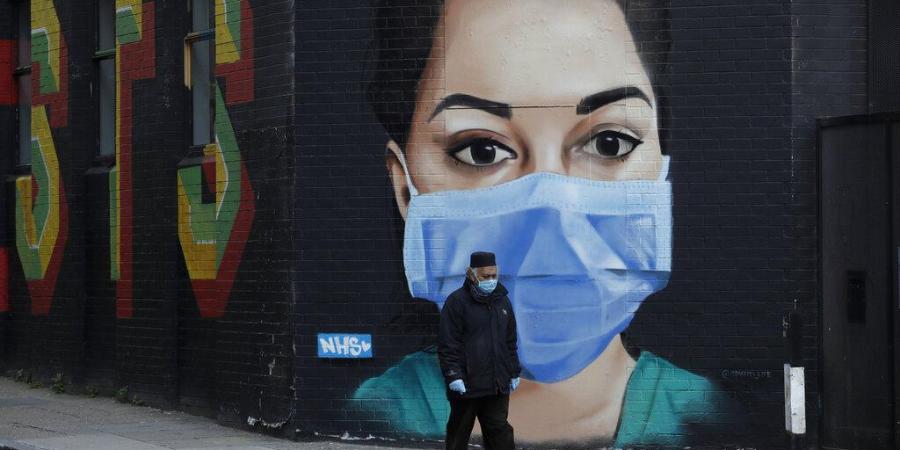 LONDON Nov 17: A UK research team’s innovative technique to cover a beard, dubbed as the “Singh Thattha”, which enables bearded medics to wear a well-fitting respirator mask while on frontline COVID-19 duties without the need for shaving, has proved effective in initial trials.

The team, led by Professor Gurch Randhawa from University of Bedfordshire and Dr Rajinder Pal Singh, sought to work on a solution following numerous calls by Public Health England (PHE) to protect doctors from ethnic minorities, including Sikh, Jewish and Muslim communities, who tend to have beards for religious reasons.

“Because shaving was a mandatory pre-requisite for wearing respirator masks, many members of the faith-observant bearded community, such as Sikh, Jewish and Muslim, have been affected and have had to face the dilemma of redeployment from frontline healthcare jobs involving exposure to COVID-19,” said Mr Randhawa, Professor of Diversity in Public Health at the University of Bedfordshire and Director of the university’s Institute for Health Research.

“Redeployment to other areas incurs a loss of skillset and need for re-training, and junior doctors have had their training impacted,” he said.

Mr Randhawa recalls a similar situation in the US from back in 2005, when a faith-observant bearded Sikh man was denied the position of a corrections officer in California as the job required staff to occasionally wear a respirator mask.

A media report said at the time Kamala Harris, then Attorney-General and now Vice President-elect, was unable to support the appointment as the beard would pose a problem since the policy mandated gas-mask fitting.

“In both of these scenarios, the common theme was that the beard was considered to be an impediment to the wearing of a respirator mask. The other common principle was the concern for the health and safety of the employee. There was no alternative choice – or maybe, it was unexplored,” recalls Mr Randhawa.

Against the backdrop of this conundrum, Manchester-based transplant surgeon Dr Rajinder Pal Singh came up with the idea of using an under-mask beard cover, or a beard band traditionally referred to as the ‘thattha’ by Sikhs, to allow him to wear an FFP3 respirator mask – an essential personal protective equipment (PPE) for frontline medics – and his innovation ended up passing the National Health Service (NHS) qualitative Fit Test.

“Respirator masks are the ideal respiratory protective equipment (RPE) for protection from small virus particles such as COVID-19, as well as from industrial toxic gases and smoke,” explains Dr Singh.

“In the current pandemic, for safety reasons, these masks are mandatory for healthcare workers exposed to aerosol generating procedures (AGPs) involving COVID-19. Wearing these masks requires a person to be clean-shaven to allow for a robust face-mask seal. There is no evidence to suggest why, instead of shaving, the facial hair factor cannot be overcome with an under-mask beard cover,” he said.

“The concerns for safety, as highlighted by Kamala Harris in 2005, for bearded men to fit a gas-mask for industrial reasons, as well as in 2020 for COVID-19 healthcare reasons now seem to be addressed timely by the ‘Singh Thattha’ technique,” he added.

According to the University of Bedfordshire, an initial trial meant that there appeared to be a choice – that shaving may not be essential to don a respirator mask. The partnership between Professor Randhawa and Dr Singh led to an in-depth study of the promising and innovative alternative. The two also teamed up with a group of co-authors for the study – Dr Sukhpal Singh Gill of the Sikh Doctors and Dentists Association (SDDA), Dr Sukhdev Singh of the Sikh Doctors Association, Dr BS Ubhi, Dr Gaggandeep Singh Alg, Dr HS Safri and Dr Gurpreet Singh.

Over the past few months, the team has collaborated to evaluate the efficacy of the “Singh Thatth” technique and the study findings, published in the December issue of Journal of Health Infection, showed that 25 out of 27 bearded Sikh dentists had been able to pass the qualitative “Fit Test” using the under-mask beard cover.

“Facial hair, albeit an accepted risk factor for face-mask leakage, can be overcome by using an under-mask beard cover,” the study concludes.

The SDDA also funded a robust quantitative pilot study in Shrewsbury, where five out of five bearded Sikhs passed the Quantitative Fit test.

“The concept of making the mask fit the face, rather than making the face fit the mask should be reasonably taken forth in this regard. We look forward to building on these study findings and informing future policy and practice,” said Dr Gill.

“The alternative facemasks recommended for those unable to shave for religious or other reasons, such as PAPR (Powered Air Purifying Respirators) are expensive, limited in supply and are cumbersome to use… Also, dentists are unable to perform all the procedures in their repertoire,” he said.

British Sikhs have been campaigning to raise awareness around the issue of safety equipment for bearded professionals since earlier in the year. The Sikh Doctors Association had reports of some of its members being moved out of their usual shift rota at NHS hospitals for refusing to shave their beards and failing a so-called “fit test” of critical facial protective gear, resulting in a drive to find alternatives. – PTI