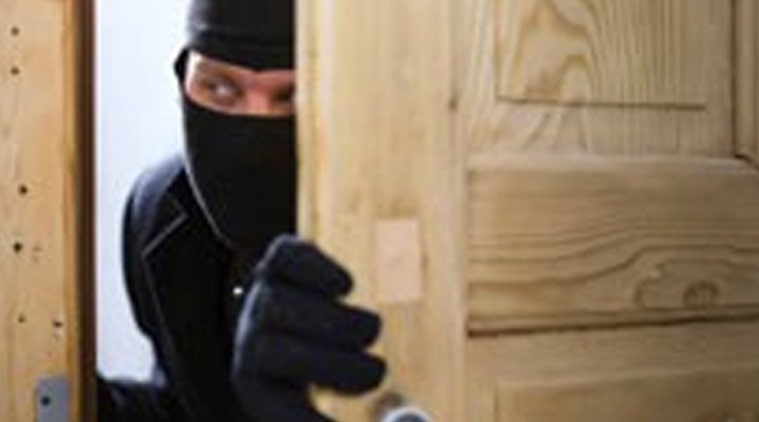 BEXLEY Sept 4: This is the moment masked thugs break down the door of a family home leaving its terrified owners crying desperately for help.

The gang of four men was caught on CCTV footage breaking into a semi-detached house in a quiet, residential street in Bexley, south east London just after 9pm on Wednesday.

The brazen burglars are seen carrying an axe, a knife and what the victims believe was ‘acid to throw on someone’ if they answered the door.

They can be heard saying ‘It’s Indians mate’ before one takes a running jump to take the front door of the five-bedroom property off its hinges with the axe.

No one was inside, but the homeowner can be heard shouting to his partner ‘we’re being burgled, we’re being burgled’ through a two-way video security system. The suspects escaped with cash and jewellery and are still at large.

Although they were not at home at the time, the owners of the house are able to see what is going on through a remote access security camera system that offers live video footage of their home via Wi-Fi on their smartphone or tablet.

They are left helplessly watching the burglary unfold and the victim is heard shouting: ‘They’re in the house. Phone the police, we’re being burgled,’ as the alarm starts going off and the suspects make a run for it.

How can you see who is at your door when you are not at home?

Video doorbells give residents the ability to answer the door and see who is outside their property when they are not at home or inside but unable to answer.

The system uses a camera installed by the door to monitor who is there.

There is also a sensor that can detect movement and notify homeowners when someone is outside.

Using Wi-Fi and a smartphone, computer or tablet, the system will flag up when you have visitors – or when there is an intruder.

The device will then show CCTV footage from the door camera so you can decide whether they want to let them in or not.

More advanced video doorbells will have an unlocking device so residents can let people in remotely.

Their son-in-law posted the video footage on Facebook branding the men responsible ‘absolute scum’ and appealing for witnesses to help catch them.

The victims are a married Asian couple in their fifties who were out at a family dinner nearby when it happened.