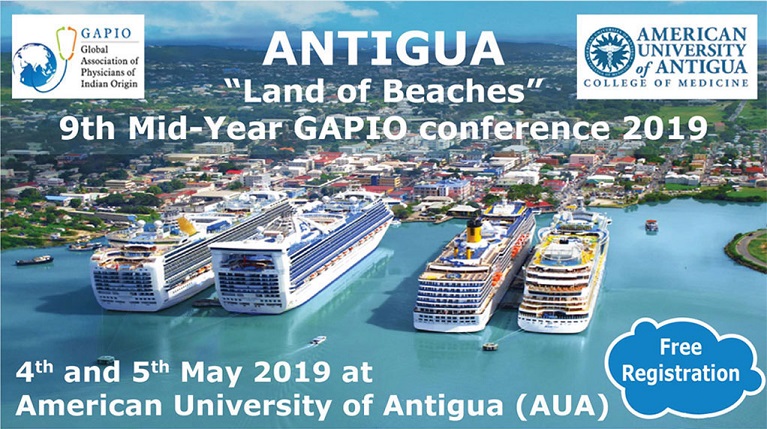 NEW YORK April 25: The 9th mid-year conference of the Global Association of Physicians of Indian Origin will be held in Antigua May 4 and 5, the organization announced yesterday.

The conference is being organized in collaboration with the American University of Antigua (AUA) and Antigua Medical Association (AMA), and will be held in the campus of the AUA, in the “Land of 365 Beaches.”

“The conference is a celebration of India’s invaluable contribution to global healthcare.

The conference will bring together physicians of Indian origin on a unique platform, where they can share their experiences, network and learn from each other,” Dr. Reddy is quoted saying in the press release, adding, “In addition to physicians from India, we also look forward to welcoming physicians of Indian origin from Antigua and neighbouring countries like Guyana, Barbados, Grenada, Trinidad & Tobago, Suriname in addition to the UK, USA and Canada.”

Dr. Ramesh Mehta, the current president of GAPIO, provided details relating to the Antigua meeting. “This conference will have sessions on recent developments and advances in Cardiology, Metabolic Syndrome like Obesity and Diabetes, Nephrology with a focus on transplants, and Neurology.

The highlight of the conference will be sessions on Artificial Intelligence in healthcare, Vedic Wisdom – Leadership in Medicine as well as sessions on Reaching the unreached and Global Opportunities in Healthcare.”

Dr. Anupam Sibal, vice president of GAPIO and Group Medical Director and Senior Pediatric Gastroenterologist and Hepatologist, Apollo Hospitals Group, said “The Indian diaspora has a wealth of talent in medicine and GAPIO is the platform that brings everyone together,”

“The fact that out of 1.4 million doctors of Indian origin in the world, more than 300000 are excelling outside India and have helped establish the credentials of Indian doctors globally,” Sibal added, praising Indian doctors who he said, “are recognized for their clinical acumen, research and academic contributions.”

“GAPIO now has representation from 34 countries worldwide and our 8 earlier mid-year conferences in seven countries have helped establish global collaboration. In the coming year, plans will be created to expand the presence of GAPIO. Social media will be used effectively to break geographical barriers. A resource centre is being created.”

The 9th Mid-Year GAPIO Conference 2019 follows the successful Global Healthcare Summit (GHS) that was held in India in December 2018, in association with AAPI.

Envisioned in 2009, GAPIO was registered as a non-profit organization in 2011, with the vision of “Improving Health Worldwide,” by empowering physicians of Indian origin to achieve highest professional standards, to provide affordable good quality healthcare, to contribute to local and regional community development and thereby help to reduce health inequalities and alleviate suffering globally.

It believes there is a need for greater visibility and cohesion of these physicians.