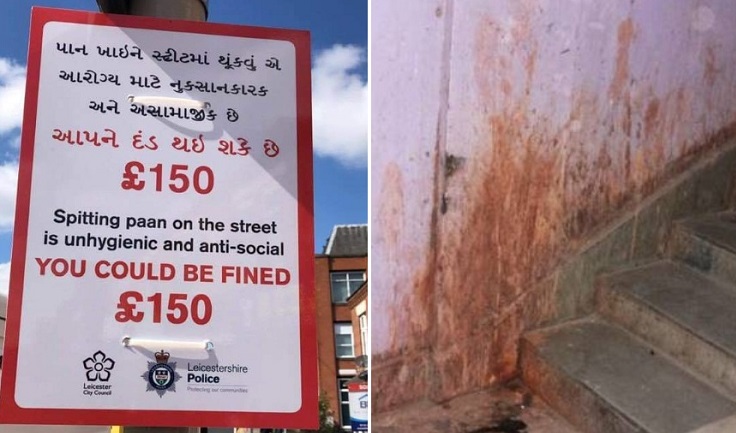 LEICESTER April 17: If you thought Indians were only spitting on roads back home and “behaved” themselves when they visited foreign countries, you were wrong.

In an embarrassment for Indians around the world, the city of Leicester in UK has put up a sign-board in English and Gujarati, warning people that they will be fines if they spit out red paan juice on the pavements and sidewalks, News 18.com reported.

Leicester has a growing Indian population and along with it, a growing sanitation problem as it seems several Indians have taken to spitting out paan expectorate in public spaces in the UK.

The signboard, put up by the city’s police department in collaboration with Leicester City Council, clearly singled out Gujaratis. “Spitting paan on the street is unhygienic and anti-social. You could be fined £150 (Rs 13,000)” it read, first in Gujarati then in English.

According to Leicestireshire Police, the habit seemed to be more prevalent in the east section of the city, including areas like Spinney Hills and North Evington. Belgrave, which also has a high density of Indians, was also one of the affected places.

Paan stains are a mainstay and even a distinct feature of most public spaces in India. But with a growing Indian population, it seems homesick NRIs are taking the disgusting habit and its rebellious residue to foreign lands.

The is not the first time unsightly public expectoration caused by chewing paan – a mixture of tobacco, betel nut, spices wrapped in betel leaf – has stained public discourse in the UK.

The Council also stated that paan juice stains were hard and expensive to remove from roads and sidewalks and alsoc caused diseases, along with destroying the aesthetic beauty and sanitation of a place.