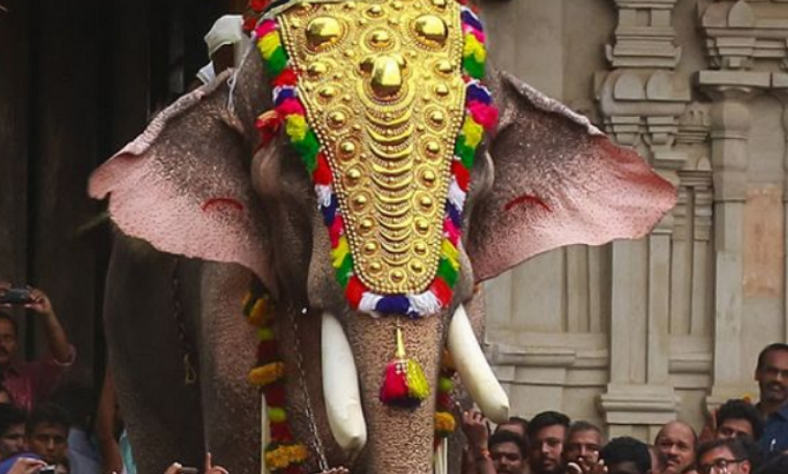 Thrissur, May 10: The fate of this year’s Thrissur Pooram hangs in balance, as Keralas’ biggest cultural festival has hit a road block over the ban of one-eyed celebrity elephant named ‘Thechikottukavu Ramachandran.’ The 54-year-old tusker which has enough fan clubs and die-hard admirers in the state, was taken out of temple duty after it ran amok on February 8.

It is partially blind after his mahout struck on his left eye with an iron-hooked stick decades ago. It has killed as many as 13 people so far and three elephants.

Yet, Thechikottukavu Ramachandran, the 55-year-old jumbo has a fan following that rivals film stars, especially in central Kerala where captive elephants are still a feudal status symbol of the festival venues.

The decision has however triggered widespread protests, with Kerala Elephant Owners’ Federation, backed by right wing outfits, up in arms against the government.

Meanwhile, the Thrissur district administration is determined to not feature the elephant in Thrissur Pooram.

Kerala’s chief wildlife warden had submitted a report to government stating that allowing the elephant at the festival will be dangerous.

Thrissur Pooram is an annual Hindu temple festival held in Kerala, India. It is held at the Vadakkunnathan Temple in Thrissur every year on the Pooram day – the day when the moon rises with the Pooram star in the Malayalam Calendar month of Medam. It is the largest and most famous of all poorams.

Most pooram festivals have at least one ornately decorated elephant being paraded in the procession taken out of the temple precincts.

From the day of sample fireworks till the conclusion, the city will host several lakh visitors including foreigners.

BJP State secretary K Surendran has come out with the allegation that some conspiracy is going on to destroy Thrissur pooram. “For pooram, Thechikottukavu Ramachandran is required only for a few hours.

Even then, attempts are being made to exclude the elephant. There is a big controversy behind this and I doubt whether it is an extension of Sabarimala issue,” Surendran said.

Surendran said he was suspicious of collector’s alertness in Ramachandran’s case since she usually doesn’t interfere in other law violations.

“The government should end steps that would challenge believers. Ramachandran should be paraded after security arrangements are made. Minister V S Sunil has the responsibility to find a solution to the elephant issue,” he said.

The discussion held on Thursday between government representatives and elephant owners to resolve the crisis regarding parading of old and partially blind elephant Thechikottukavu Ramachandran in Thrissur pooram has ended.

Minister V S Sunil Kumar informed that legal advice will be sought over the participating the jumbo in Thrissur pooram.

The decision taken will suit the wishes of Thrissur people and elephant owners. Other issues will be discussed after the chief minister returns from his foreign trip.

Meanwhile, Minister Kadakampally Surendran, who took part in the discussion, has said that there is no anxiety over the conduct of Thrissur pooram. The event will be conducted in a better manner.

Soon after the ban on Thechikottukavu Ramachandran was announced, other elephant owners took the stand that they would not parade their elephants also during the Thrissur pooram, resulting in a crisis over the pooram.