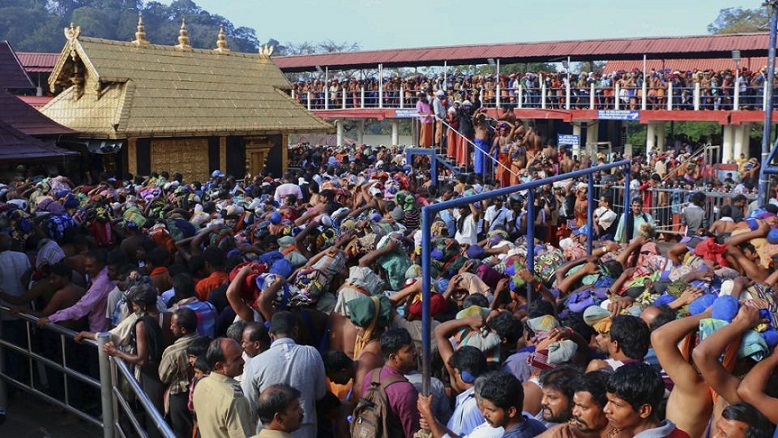 NEW DELHI March 26: The Supreme Court Monday asked the Kerala government to move the high court for seeking modification in the order relating to the entry of devotees into the Sabarimala temple.

The Kerala High Court had passed a slew of directions with regard to entry of devotees to the hill-top shrine and had also set aside “all unilateral restrictions imposed by Police” to deal with the issue.

The state government had moved the apex court challenging the directions issued by the high court saying that they were contrary to the spirit of the five-judge Constitution bench that had allowed entry of all women into the temple.

With the aforesaid liberty, the special leave petitions are dismissed,” a bench headed by Chief Justice Ranjan Gogoi said.

The bench also dismissed the plea seeking transfer of all pending petitions from the high court to the apex court on the issue pertaining to the Sabarimala dispute.

Various parties had approached the high court seeking various reliefs after a major controversy, in favour and against the apex court’s decision, had engulfed the state.

Advocate G Prakash, appearing for the Kerala government, said that as many as 32 petitions were filed in the high court, most of which were intended to stall the implementation of the main judgment due to which the state had moved the petition seeking transfer of all the pleas to the apex court.

However, as the top court has already reserved order on the review petitions in the Sabarimala case, the state did not wish to press the petitions. Moreover, only nine petitions are pending with the high court presently, he said.

The top court also dismissed a PIL challenging hike in bus fare of the Kerala State Road Transport from Nilakkal to Pamba and also sought a bus service from Pamba to Sabarimala.