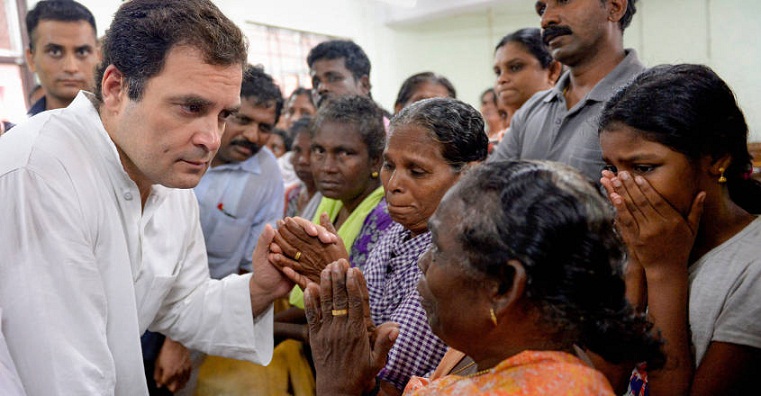 New Delhi Aug 27: Congress leader Rahul Gandhi has demanded that the minimum guaranteed days of employment under MGNREGA be raised to 200 days in a year in flood-hit Kerala and the scope of work be expanded for taking up flood rehabilitation work.
In a letter to Rural Development Minister Narendra Singh Tomar, he said the ministry has made special dispensation under the Mahatma Gandhi National Rural Employment Guarantee Act (MGNREGA natural calamities) in calamity-affected areas in the past.

He said Kerala has witnessed one of the worst floods in the last few decades and the heavy rains, inundation and landslides have left people homeless, and rendered thousands of houses uninhabitable due to the deposition of mud and slit.

“I would like to request you to expand the scope of works under MGNREGA for the state of Kerala for enabling the state to take up needed flood rehabilitation works and also increase the minimum guaranteed days of employment to a family to 200 days,” Mr Gandhi said in his letter to Mr Tomar.

He said Section 3(4) of the MGNERA Act, 2005 empowers the central government to increase the number of days of employment beyond the guaranteed period and the Rural Development Ministry should make special dispensation in calamity affected villages, blocks, taluks and districts notified by the state government.

While the MGNREGA Act guaranteed 100 days of minimum employment, the government had announced in the budget this year to increase the minimum guaranteed days of employment to 150 days in a year.