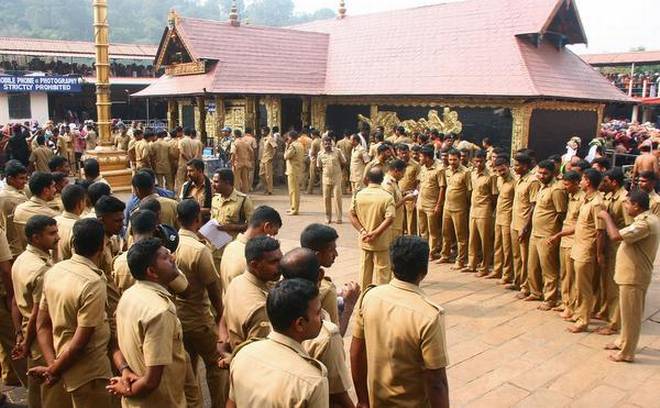 THIRUVANANTHAPURAM Oct 17: As the Sabarimala temple is set to open for Thulam pooja on Wednesday, the police are on high alert to prevent any untoward incidents.

Though senior officers are of the view that the Supreme Court verdict is unlikely to sway many young women to visit the shrine, they are not leaving anything to chance and will extend protection to female pilgrims.

“If they come, we will give them protection. We will go by the SC order,” said state police chief Loknath Behera. However, female cops are unlikely to be deployed beyond Pampa.

“Female officers will be deployed as in previous seasons. However, no decision has been taken on posting female officers in Sannidhanam,” said a top cop.

The police are on their toes as protests and counter protests triggered by the SC verdict are getting stronger.

Hindu organisations and the BJP oppose the SC verdict allowing women of all ages to enter the temple and have been organising protests, while the CPM is bracing to counter them by using the party machinery.

This development has put the police in a tight spot as they fear the protests could evolve into street brawls, said sources.

“There is no specific alert indicating any violence between the two fronts. However, general reports have been there which suggest that there could be law and order problems arising out of the Sabarimala issue,” said sources.

Meanwhile, the quarterly crime review meeting of top police officers, scheduled to be held in the capital on Monday, was postponed. The move was due to fears about the security in three key districts — Pathanamthitta, Kottayam and Alappuzha — in the absence of police chiefs.

“If the three district chiefs and the Inspector General, who is in charge of the Sabarimala hill shrine, are not present in their jurisdiction, then it might reflect in the law and order situation of those places.

That’s why the meeting was postponed to another date,” said sources.

Behera said he is monitoring the law and order situation. “The district police heads have been asked to ensure that law and order should not suffer due to the protests,” he said.

He said all arrangements are in place and more cops will be deployed in Sabarimala as per requirement.

The decision to set up digital darshan for devotees has been cancelled, said sources. Instead, the Virtual Q of the police will be put in place to manage the crowds. The decision was taken during a meeting here on Monday.