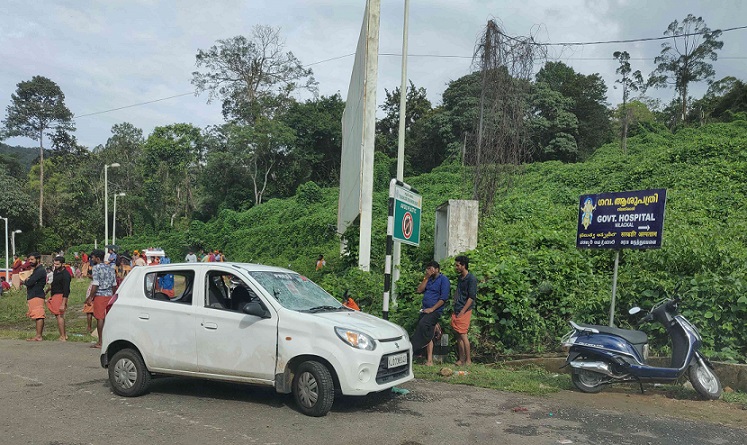 NILAKKAL, Oct 18: The gates of Kerala’s Sabarimala temple were opened this evening for the first time since the Supreme Court allowed women of all ages to enter the shrine.

However, no woman from the “banned” age group – 10 to 50 years — could make it to Lord Ayyappa’s temple amid protests that turned violent during the day.

Protesters, including elderly women, first blocked their way and even screened vehicles for women of menstrual age and asked them to stop right there, at Nilakkal, the base camp and the main entrance to Sabrimala, which is about 20 km from the hilltop temple.

Then some of the protesters resorted to vandalism, attacked women journalists and the vehicles they were in, damaged buses and threw stones at cops. The Kerala police personnel had a hard time controlling the mob. They had to use batons to disperse the crowds.

Amid the violence, a video has emerged in which the policemen can be seen taking out their anger on vehicles parked on the side of the trek.

They push stationary motorcycles to the ground and even smash their rear-view mirrors with sticks. An autorickshaw was also attacked as a big group of police personnel, some of them in protective gear, carrying shields, passed through Pamba at the base of Sabarimala.

Kerala minister EP Jayarajan said 10 state transport buses were damaged and devotees from other states were beaten up and sent back.

At Nilakkal, the police lathicharged protesters in the evening. Fifty protesters — including former Travancore Devaswom Board president Prayar Gopalakrishnan — were taken into custody.

No protesters are being allowed to gather near the temple and prohibitory orders banning large gatherings are in place around Sabarimala.

Seven people were arrested — three were in connection with an assault on a woman and her husband from Tamil Nadu.

Kerala Chief Minister Pinarayi Vijayan has said his government will not give in to attempts to prevent women from entering the temple and police will help uphold the Supreme Court order.

The BJP and the Congress have demanded a review of the court order.