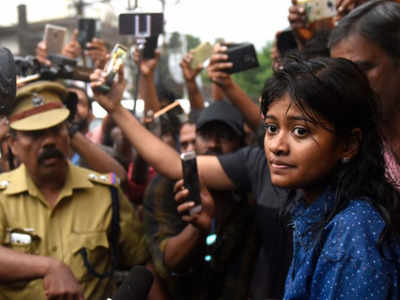 THIRUVANANTHAPURAM July 28: Police have started investigation against trollers and others who foul-mouth Hanan through social media soon.

The police swung into action after receiving the nod from Chief Minister Pinarayi Vijayan, who had come out in support of the girl.

The police have registered the statements of Hanan and a case will be filed by Friday evening. Kochi Palarivattom police are in charge of the probe.

Since persons behind hate campaigns in social media are easily traceable, many people may get caught legally for their nefarious cyber activities. The recently introduced security feature of Whatsapp that helps one to have a control over Forwarded messages will also come in handy for the police.

For resorting to mud-slinging against Kochi college student and junior film artiste Hanan, the police have filed a case against Muslim League activist Noorudheen. It was he who first kicked off the negative campaign against Hanan. Police said those who shared his video will also be legally trapped.

Kochi police on Friday recorded the statement of the girl regarding the cyber-attack that had been going on against her.

Meanwhile, Noorudheen has said in a video posted on his Facebook page that he made allegations based on the information given by an online media cameraman.

“After hearing about the girl’s story I reached there to help her. But this cameraman used me for their rating. I have not said anything against her. I only conveyed doubts in the mind of people. All those who shared my video are offenders. Police have not arrested me yet,” he says in the video.