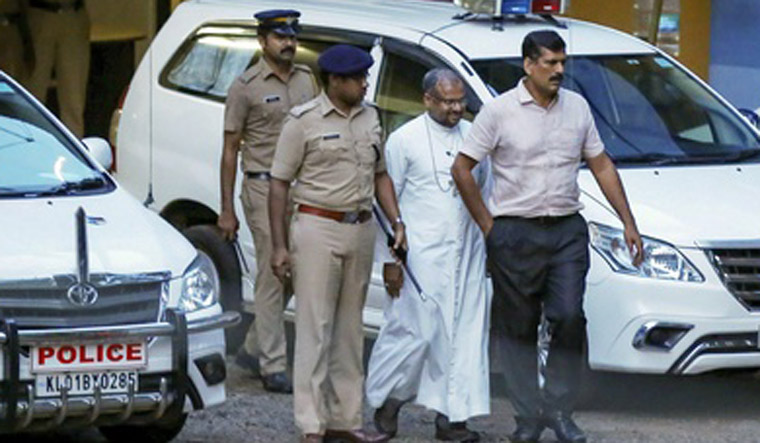 KOCHI Sept 20: Jalandhar Bishop Franco Mulakkal was interrogated for nearly seven hours since 11 in the morning. He has been asked to appear again tomorrow at Superintendent of Police office in Tripunithura, where he was interrogated on Tuesday. Franco left the place around 6.30 pm.

“He has been asked to appear tomorrow at 11 am,” the SP told the media. The interrogation was done by the SP and DySP Vaikom K Subhash. The officers were tight-lipped about the interrogation and the SP declined to comment on whether Franco admitted to the crime.

“Further details could be divulged only after the investigation is over,” the SP said.

While the Malayalam media have been reporting that Franco was asked 104 questions, SP Harishankar said, “We asked him a lot of questions; it could be 104 or less.

I don’t know who is counting the number of questions when only the officers and I were inside the room. I cannot say how many questions were asked as the interrogation is not over yet.”

Meanwhile, AIYF, the youth wing of the CPI, staged a protest outside the SP office and waved black flags at Franco’s vehicle demanding his arrest. AIYF has been protesting against the Bishop ever since the complaint was filed against him.

The buzz from the morning was that the interrogation won’t be completed in a single day, considering there were discrepancies in the statements of the complainant nun and that of the witnesses.

This is the second time that the Bishop was being interrogated in the case and the first that time the Bishop was coming to Kerala after the nun lodged a complaint against him on June 21.

The Bishop moved the High Court with a bail application plea on Tuesday, which the court deferred for hearing on September 25. The court, however, didn’t prevent the arrest of the Bishop.

The survivor nun has been interrogated several times, which had attracted the wrath of the protesting nuns. The protest by the nuns, declaring solidarity with the survivor, completed 12 days on Tuesday. They told TNM the protest won’t be called off until justice is ensured.