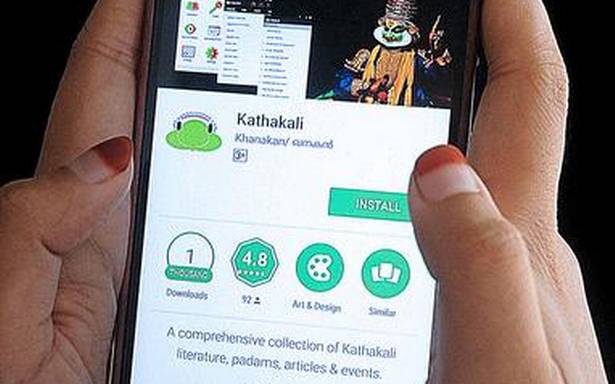 KOCHI: Close to dusk, walking amid a light drizzle along the rain-soaked path leading to Sopanam Hall in a quiet corner of Cherppu in Thrissur was the epitome of tranquility.

Inside, the scene was more lively as Peesappilly Rajeevan performed an improvised khanakan in Bakavadham.

A sizeable crowd was focused on the artist, yet many of them frequently took their eyes off the stage and glanced at their smartphones. It is an image fast becoming a norm at kathakali venues. Smartphones, especially apps, have become a handy tool for many to understand the classical Indian dance drama in depth and enjoy it meaningfully.

In the past, people came up with many initiatives to popularise kathakali but gave up midway because of the fear that they were probably diluting it. But smartphones — which became widespread only this decade — have developed into a powerful tool to expand its global reach.

Though smartphone apps are used by enthusiasts of various arts and music programmes the world over, they have immense scope in Kathakali as its verticals of music, dance, literature, and acting are too deep and complex for the common man to comprehend in a desired way.

Kathakali Mobile App, arguably the most popular of the lot, is a compilation of the 47 most popular stories enacted on stage at present. It has an extensive volume of literature and its meaning as well as the raga and tala of all padams, other than audio files and upcoming events.

“It’s not at all wrong to use technological aids to understand and enjoy a complex performing art,” said Peesappilly Rajeevan, who has been making earnest efforts to increase kathakali’s popularity. “The knowledge about Kathakali was confined to a certain number of enthusiasts, but now it has become kind of an open stage where more people can come in. In addition to enjoyment, the tools enable people to study and research its various components.”

Dancer Haripriya Namboodiri added: “The advantage is that everything is in our palm and on our fingertips, and we don’t have to disturb a fellow enthusiast for interpretation while watching a live performance.”

M Muraleedharan, an enthusiast from Chalakudy, said, “Apps and blogs help kathakali aficionados make an entry to the secondary level as the primary one is just watching the stage movements and casually listening to the music.”

Many groups are active on Facebook and WhatsApp, providing updates on upcoming events as well as uploading videos and organising kathakali programmes. They are live-streamed which, according to Rajeevan, “should make the performers realise the whole world, and not just the spectators at the venue, is watching them”.

So, the next time when you see an enthusiast sitting next to you frequently glancing at his smartphone at a Kathakali performance, do not look down upon him. He may be enjoying the performance better than you.