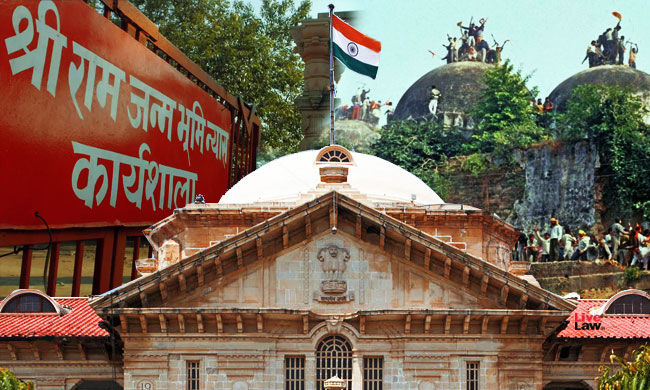 New Delhi Aug 21: Terming archaeological evidence as “credible” and “scientific”, the counsel for deity “Ram Lalla” told the Supreme Court Tuesday that it referred to the existence of a “Vishnu Hari” temple in middle of 12th century at the disputed site of Ayodhya where Babri mosque later came up either on the ruins or after demolition of the temple.
On the 8th day of the hearing in the politically sensitive Ram Janmabhoomi-Babri Masjid land dispute case, senior advocate C S Vaidyanthan, appearing for the deity, told a five judge Constitution bench headed by Chief Justice Ranjan Gogoi that there existed a “massive” “un-Islamic” structure at the disputed 2.77 acre site which has been revered by Hindus as the birthplace of Lord Ram since “time immemorial”.

He referred to the recovery of an old stone slab of the size of 4×2 feet during the demolition of the disputed structure on December 6, 1992 from the site and read out the report of the Archaeological Survey of India (ASI) and the testimonies of an expert and an eye-witness journalist to highlight the findings that there was a massive temple.

“ASI is a very reputed body not in India but internationally also with regard to its work done on excavation, research and preservation of old sites and monuments…There was no reason to disbelieve the ASI”, the senior lawyer told the bench which also comprised Justices S A Bobde, D Y Chandrachud, Ashok Bhushan and S A Nazeer.

Besides citing ASI’s report on the slab and inscriptions on it, Mr Vaidyanthan also referred to the testimonies of archaeological expert K V Ramesh and Ashok Chandra Chatterjee, a journalist of “Panchjanya” who had allegedly seen the slab tumbling out of disputed structure at the time of demolition.

“There is historical evidence to show that Raja Govind Chandra was the ruler of the ‘Saket Mandala’ in the 12th century and a massive temple of ‘Vishnu Hari’ existed during this period,” he said, adding that the archaeological evidence pertaining to the slab and inscriptions on it proved this.

“The archaeological evidence have not been challenged. There was no challenge to K V Ramesh’s testimony also. But the very fact that the stone slab was found from the disputed structure has been contested by the other side,” the counsel for the deity said.

The journalist claimed to have seen the slab falling from the western wall of the southern dome structure and his cross examination was consistent with the same, he said.

He also referred to the “unshakeable faith and belief” of Hindus and said that they have been undertaking pilgrimages of the site for centuries believing it to be the birth place of Lord Ram and this coupled with other evidence prove that the place was the Hindu religious only.

“The worshippers have no axe to grind and they have been undertaking the pilgrimage of the place for a long period of time. The belief coupled with the findings of the excavated artefact and other oral evidence proved that this place is the the birth place of Lord Ram,” the lawyer said.

He then referred to the images on 14 “Kasturi” pillars of the disputed structure and said that the images of Hindu gods and goddess, besides others like lotus on them, are attached to Hindu faith only and are “alien” to Islam.

Mr Vaidyanathan then referred to the testimonies of several Hindu and Muslim witnesses recorded during the hearing of the lawsuits to buttress his claim that the site is the birth place of Lord Ram.

He dealt with the testimonies of Mohd Hashim, one of the litigants in the case, Haji Mehboob Ahmed and Mohd Yaseen and said they have stated that the place has been worshipped by the Hindus for centuries and they have been doing “panchkoshi” and “14-koshi parikarma” of the place since time immemorial.

He also referred to one of the testimonies and said that there was no “Imam” to look after the disputed mosque as was the case with other such mosques in Faizabad.

The deposition of a 90-year-old man showed the significance of the site to Hindus, based on their faith and belief, he said.

“His evidence has not been shaken even in cross examination. It is the proof of the faith and belief of Hindus in going to Ayodhya to visit Ram Janmabhoomi,” he said.

Mohd Hashim had stated that the manner in which “Mecca was holy for Muslims, Ayodhya was sacred for Hindus”.

Referring to the statement of another Muslim witness, the senior lawyer said that if it could be proved that there was a Hindu temple where the Babri mosque came up, the Muslims would not consider it a mosque at all.

Mr Vaidyanathan said that he would conclude his submissions in the case ion Wednesday.

Fourteen appeals have been filed in the top court against the 2010 Allahabad High Court judgment, delivered in four civil suits, that the 2.77-acre disputed land in Ayodhya be partitioned equally among the three parties — the Sunni Waqf Board, the Nirmohi Akhara and “Ram Lalla Virajman”.

Babri Masjid was demolished by right-wing activists on December 6, 1992, in Ayodhya, leading to the protracted legal battle.