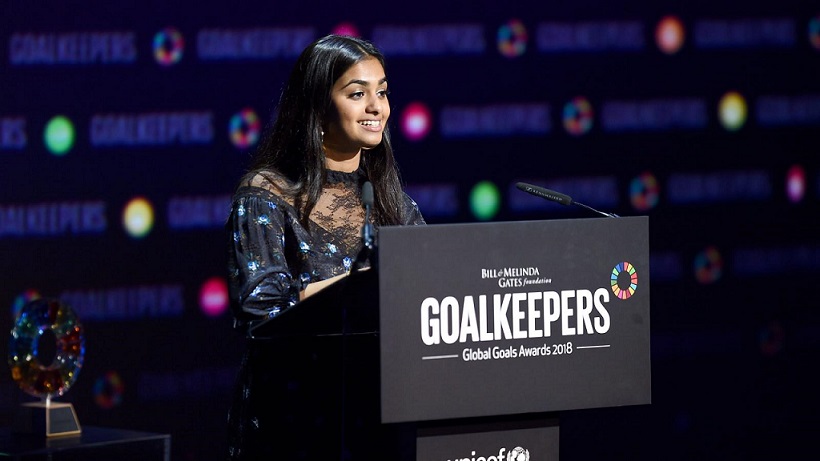 When the word ‘menstruation or periods’ is so much trending in Kerala, a Malayalee teenage girl in the United Kingdom is on the campaign to ensure that no girl child should miss school due to them being unable to afford menstrual products and also to smash the stigma surrounding menstruation.

In December 2017, Amika held the #FreePeriods protest outside Downing Street which was attended by over 2,000 young people.

Following this, Amika began the #FreePeriods petition, which now has hit more than 210,000 and is rising. Although the petition is to get the government doing what they have to, #FreePeriods has now

become a movement where hundreds of thousands of people agree with the cause. Amika’s aim is to keep the heat on with the #FreePeriods campaign to raise awareness of period poverty and to make people to talk about menstruation and feel at ease with it in the UK and globally.

The campaign launches with a Crowdfunding drive to raise funds, with a requirement that £10k must be raised in 30 days for any of the pledges to be collected.  (https://www.crowdjustice.com/case/freeperiods).

“The right to an education is one of our fundamental human rights, and we believe that under the Equality Act, the government has a legal duty to ensure that all children have equal access to education,” says Amika.

Amika had several meetings with MPs and Lords in Westminster about how to tackle period poverty. “All the ministers I’ve had meetings with have been really supportive but the Conservative government has been really slow to reply.

My own MP sent me a letter with the usual strapline saying that the onus is on schools to end period poverty. But we know schools are facing a huge funding crisis and this just isn’t acceptable”, says Amika.

Amika has worked hard to persuade major political parties to pledge to address period poverty in their manifestos. “The Conservatives are the only party to refuse to do so, and this is discouraging.

Labour, The Liberal Democrats, The Green Party and the Women’s Equality Party all pledged to tackle period poverty if they come into power.

Many political parties are now acknowledging that period poverty is hugely damaging issue and they want to invest in the future of young people by making sure that girls stay in school, and that’s really important”, says Amika.

Many organisations, including the United Nations, have been vocal in their support of the Free Periods.

“When I was invited to New York, I was really encouraged when I visited the UN for the General Assembly that so much focus was given to ending global issues such as period poverty.

Facebook also invited me to Washington in March of last because they were keen to hear about Free Periods. It’s good to see large corporations get behind campaigns such as FreePeriods.

I would also say that I’m lucky enough to have FreePeriods featured in a multitude of different media. Almost every national newspaper has covered the campaign and have been really supportive”, says Amika.

Amika’s next main intention is to smash the stigma surrounding menstruation. Amika says: “The taboo means that girls are reluctant to talk about period poverty, and it becomes a silent issue, shrouded in secrecy and shame.

Part of my campaign is to change that, to reframe the way we perceive menstruation and to teach young girls that we should be talking more openly about them. I would love to see girls across the globe talking about their periods with pride, rather than with embarrassment and apology.

There is a huge amount of reluctance to discuss menstruation and much of it is ingrained and cultural and we really need a sea change in our perception of periods to be able to achieve true gender equality.

According to Amika Malayalees in general are very progressive in their attitudes towards gender equality on the whole.

According to her the inheritance of property rights by daughters and the model of social progression, healthcare and education for women and girls in Kerala is an example to many countries across the world.

“The Sabarimala ruling by the Supreme Court, and the 620km chain formed by millions of incredible women, for me, highlight power of women coming together to stand up for gender equality and make it clear that women deserves equal treatment and rights.

I hope that this is just the beginning of Kerala taking a stand against outdated and patriarchal traditions. Even though there has been resistance towards the overturning of the ban, I believe that issues like this require a real, cultural shift in thinking, and that can take many years to achieve”, summarises Amika.