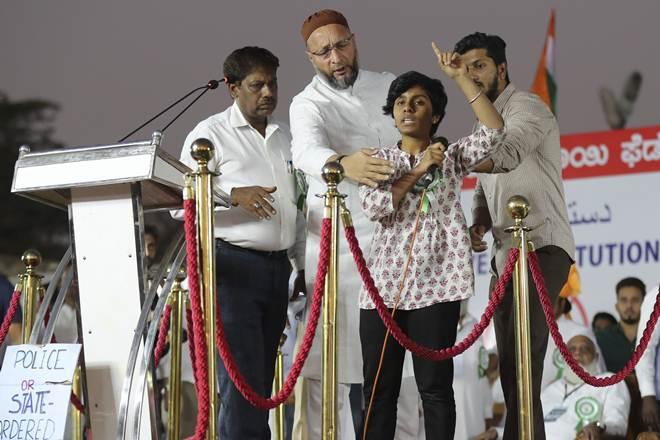 Bengaluru Feb 21: Leaving the organisers of an event to protest against the contentious citizenship law, NRC and NRP in Bengaluru red-faced, a young woman on Thursday raised “Pakistan Zindabad” slogan in the presence of AIMIM chief Asaduddin Owaisi, who denounced her action and asserted “we are for India”.
The woman, identified as Amulya, asked people to shout with her “Pakistan Zindabad” after the organisers of the event under the banner of “Save Constitution” invited her to address the gathering soon after Mr Owaisi came on the stage.

Soon Mr Owaisi rushed to snatch the mike from her hands and was joined by others who tried to remove her from the state. But the woman was adamant and raised the slogan again repeatedly.

Later, the police stepped in and removed her from the dais.
Mr Owaisi then addressed the gathering, saying he did not agree with the woman.

“Neither me nor my party has any link with her. We denounce her. The organisers should not have invited her here. If I knew this, I would not have come here. We are for India and we no way support our enemy nation Pakistan. Our entire drive is to save India,” the AIMIM MP said.

JD(S) corporator Imran Pasha claimed she was planted by some rival group to disrupt the event.

The woman, he said, was not in the list of speakers and demanded that the police investigate the matter seriously.