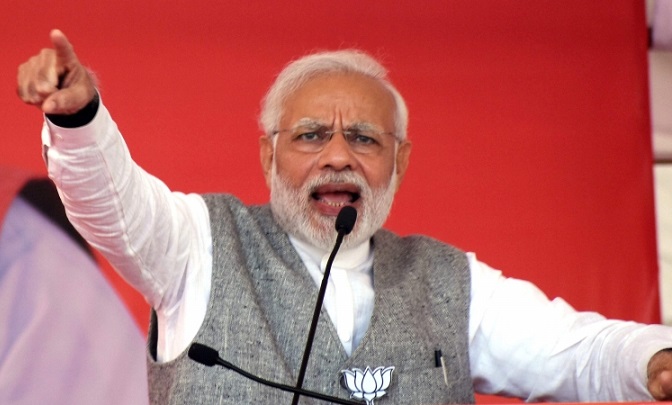 Thrissur, Jan 28: Prime Minister Narendra Modi on Sunday lashed out at the CPI(M)-led government in Kerala and said the Sabarimala issue had shown to the people of the country how the communist government was trying to disrespect the culture of the state.

“The issue of the Sabarimala Temple has caught the attention of the entire nation. The people of India are seeing the manner in which the Communist Government of Kerala are disrespecting all aspects of Kerala’s culture,” said PM Modi over Sabarimala row.

“Unfortunately today, the cultural ethos of Kerala is under attack and this attack is being led by the party that is governing the state,” he added. Modi said his government had made efforts to make all kitchens in the country smoke free.

“When we came to power, we made efforts to make all kitchens smoke free. At that time, only 55 per cent of houses had gas connections.

But today we have achieved 90 per cent,” he said. “It is an honour that our Government had the opportunity of conferring the a Padma Award on Nambi Narayanan. We value each and every person who is working to make India stronger,” said the PM.

Targeting the Congress over espionage charges against Nambi Narayanan, which were recently dropped by the Supreme Court, the prime minister said, “More than two decades ago, a hardworking and patriotic ISRO scientist, Nambi Narayanan was implicated in a false case, just because a few UDF leaders were settling political scores.

Imagine, for their own politics, they damaged national interest, troubled a scientist.” “For them science can be abused as spying, for us science is a matter of national pride.For them solar was a means for a scam, for us solar is a means for a global alliance,” he added.

“Let me tell you, neither the Congress nor the Communists have any concern for women empowerment.If they did, they would not be opposing the NDA government’s efforts to ban Triple Talaq,” said PM  Modi.

Launching a scathing attack on the Opposition, PM Modi said, “Abuse me as much as you want but don’t put barriers in India’s progress.

Abuse me as much as you want but don’t abuse our great nation.” “What is even more worrying is that the entire Opposition, be it the Congress or the Communists have zero regard for any institutions.

For them, every institution, the armed forces, the police, the CBI, the CAG…everyone is wrong but they are right,” said PM Modi. “They are also questioning the Election Commission.

The entire nation was amused to see a press conference in London, where, on foreign soil India’s democratic ethos was questioned,” said PM Modi.