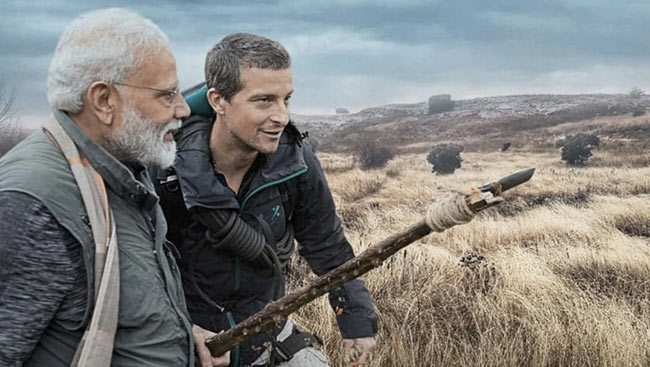 Mumbai Aug 23: Discovery Channel’s special of Bear Grylls’ “Man Vs Wild”, featuring Prime Minister Narendra Modi, made 3.69 million impressions upon its premiere.
The special episode, featuring the famed survivalist and adventurer with PM Modi, was shot in the Jim Corbett National Park. It aired at 9pm on Discovery Channel on August 12.

In a statement, the channel quoted the data from Broadcast Audience Research Council (BARC) and said the premiere delivered the highest-ever reach for the infotainment genre with 6.1 million tune-ins, which was 15 times more as compared to the last 4 weeks average of the time slot of 9-10pm in the urban markets.

“The premiere slot performance grew an astonishing 50 times giving an unprecedented 93% channel share to Discovery channel among the infotainment genre.

Discovery also noted that that cumulative reach for the show across Discovery network, originals and repeat included, as well as DD National was an “imposing 42.7 million”.

In light of the show’s success, the channel pledged to donate a “generous” sum towards the cause of tiger conservation in India.

“With this contribution, Discovery India will extend support to Tiger conservation program at Corbett Landscape and Sundarbans Biosphere Reserve in partnership with WWF India,” the channel said.