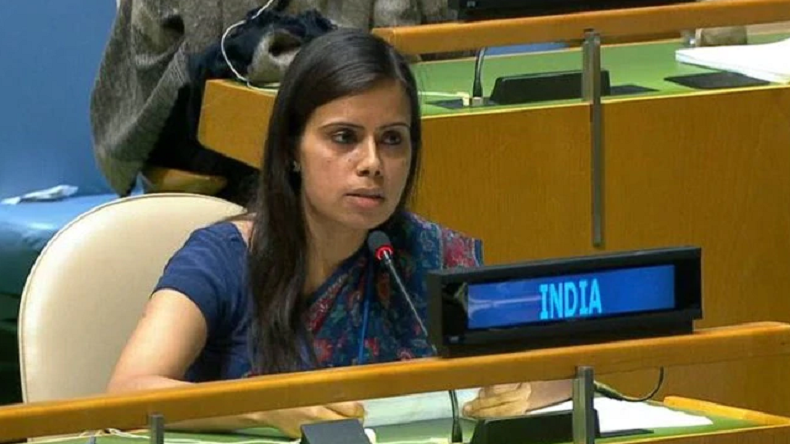 United Nations Oct 1: India on Sunday strongly hit back at Pakistan for the “preposterous allegation” its Foreign Minister Shah Mehmood Qureshi made at the UN that terrorists behind the 2014 attack on a Peshawar school were “supported” by India, saying the “despicable insinuation” dishonours the memory of the children killed in the assault.

Indian diplomat from the country’s Permanent Mission to the UN, Eenam Gambhir, exercised India’s Right of Reply and rejected Qureshi’s baseless allegation made during his General Assembly address on Saturday night.
“Among the most outrageous was the preposterous allegation relating to the horrific terror attack on a Peshawar school four years ago,” Gambhir said.

She reminded the new Pakistan government under the leadership of Prime Minister Imran Khan, that there was an outpouring of sorrow and pain in India following the massacre of children in 2014.

She said both Houses of India’s Parliament had expressed solidarity while paying respects to those killed. “Schools all over India had observed two minutes of silence in their memory.

The despicable insinuation made by the foreign minister of Pakistan dishonours the memory of the innocent lives lost to terrorists that day,” Gambhir said.

She said the allegation was a “desperate attempt” to look away from the monster of terror Pakistan has created in its quest to destabilise its neighbours and covet their territory.

Qureshi had said that Pakistan will never forget the mass murder of more than 150 children in the Peshawar school, the Mastung attack and many others that “have links with terrorists supported by India.”

The Peshawar attack was carried out by heavily-armed 8-10 Taliban suicide bombers who stormed the army-run school and took several hostages. The attackers wearing paramilitary Frontier Corps uniforms had entered the school and started indiscriminate firing.

Gambhir also took a dig at Qureshi’s emphasis on a “new Pakistan” under Khan, saying while the Indian delegation had come to listen to Pakistan’s “new” foreign minister outline the vision of a new Pakistan, “what we heard is a ‘New Pakistan’ cast in the mould of old.”

Gambhir tore into Pakistan’s claim that it has turned the tide against terrorism, saying a fact-check of this claim will give a different picture.

She asked if Pakistan can deny the fact that it is the “host and patron” of 132 of the UN-designated terrorists and 22 terrorist entities listed under the UN Security Council Sanctions regimes.

“Will Pakistan deny that the UN-designated terrorist Hafiz Saeed enjoys a free run inside Pakistan and spews venom and sets up candidates for electoral offices,” she said.

With Qureshi again raking up the Kashmir issue, Gambhir asserted that India is making it clear to the “new government” of Pakistan that the entire state of Jammu and Kashmir is and will remain an integral part of India.

The economist was appointed and removed by Khan’s government from the Economic Advisory Council on the grounds that he belongs to a minority.

Mian is an Ahmadi, a religious minority of Pakistan. “Before preaching to the world, championing of human rights should begin at home,” Gambhir said.

She said a report by the Office of the UN High Commissioner for Human Rights on Kashmir, which Qureshi mentioned and welcomed in his speech, is a publication that no UN member-state had asked for or supported and on which no action was taken.

India lambasted Pakistan’s assertion that New Delhi had called off the proposed foreign minister-level talks on flimsy grounds. “The new foreign minister of Pakistan chose to term the gruesome killing of our security personnel by Pakistani-sponsored terrorists as ‘flimsy grounds’,” she said.

She said Qureshi’s speech was made up of “fake allegations and fake facts” which can only make for a “fake vision.”

Qureshi had said Pakistan desires a relationship with India based on sovereign equality and mutual respect and sought resolution of disputes through a serious and comprehensive dialogue that covers all issues of concern.

He said Pakistan was to meet on the sidelines of this UNGA Session to talk about all issues with India but New Delhi called off the dialogue for the third time on flimsy grounds. “They preferred politics over peace,” he had said.

India had called off the meeting, citing the brutal killings of three policemen in Jammu and Kashmir and after Islamabad released postage stamps glorifying Kashmiri militant Burhan Wani.

“For a new vision to materialise, Pakistan must demonstrate that it has moved beyond a narrative of deception, deceit and distortion,” Gambhir said.

Exercising its Right of Reply, Pakistan said the claims of religious superiority are perpetrated through state patronage all across India.

The Pakistani representative made a reference to Farook Ahmad Dar, saying he was tied to an army vehicle and used as a human shield in the Valley. He said members from India’s minority communities are publicly lynched at the hands of Hindu zealots.

He said Jammu and Kashmir is an internationally-recognised dispute and the UN has called for holding of a impartial plebiscite to ascertain the wishes of the Kashmiri people.

He said Jammu and Kashmir is not a part of India, adding, “India cannot hide behind semantics anymore.”