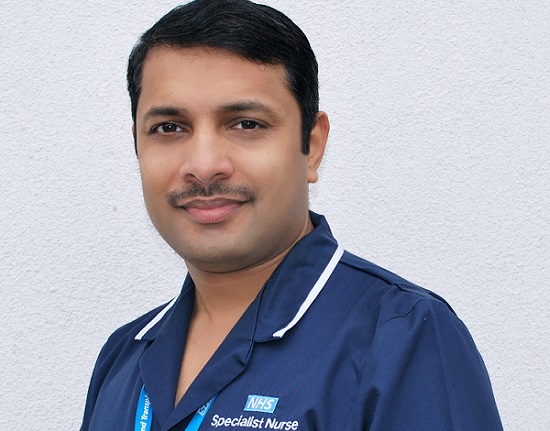 GILLINGHAM (Kent) June 8: Shibu Chacko from Kent has brought in one of the highest honour a UK Malayalee can receive with him being accorded the MBE recognition for his services within the NHS Trusts in the United Kingdom.

The Most Excellent Order of the British Empire (MBE) is a British order of chivalry, rewarding contributions to the arts and sciences, work with charitable and welfare organisations or for an outstanding achievement or service to the community.

Shibu Chacko from Kent will become the youngest Malayalee ever to receive an MBE (Most Excellent Order of the British Empire) from the Queen. Shibu has been included in the list of MBE awardees in the Queen’s Birthday Honours list for the role he played in creating an understanding of organ donation in the Black and Minority Ethnic (BME) community.

The noteworthy award comes to Shibu also for the course which he has tailored to educate medical professionals on the topic of organ donation.

Shibu created the world’s first course on Organ donation for healthcare professionals for them to understand the key processes in organ donation; in partnership with the St. George’s University of London. St George’s is the UK’s only university dedicated to medical and health sciences education, training and research.

NHS Blood and Transplant fully has now endorsed this course as an approved programme of study.

Shibu is the lead educator for the course along with a professor from the University. This course has been a huge success and has received excellent feedback from professionals within and outside the UK. Many medical universities in the UK such as St. Georges, UCLH has made it as a mandatory programme for the medical students to undertake as part of their final year of study.

Reports say that this course has been attended by over 2,800 learners from 78 countries and the popularity is growing each day. (https://www.futurelearn.com/courses/organ-donation)

Shibu works as a Specialist Nurse in Organ Donation with NHS Blood and Transplant in the South East region of England.

He works in hospitals across the UK to support families through the organ donation process and act as the key point of contact for organ donation within the hospital and work directly with families and doctors to ensure that all those who die in circumstances where they are able and want to donate organs for transplant are given the opportunity to do so.

He also support families during end of life care period and discuss organ donation options with them.

Shibu became the first Donor Ambassador of the NHS Blood and Transplant in the UK in 2015. He worked as a community volunteer to promote organ and blood donation among various faith and minority communities in the South of England and achieved over 3000 new registrations to NHS Organ Donor Register.

Shibu is from Chatham in Medway in the county of Kent. Back in India he is from Koothattukulam in Ernakulam District in Kerala state. He is married with two sons, currently studying in secondary school and his wife works for Medway NHS Trust as a staff nurse in critical care.