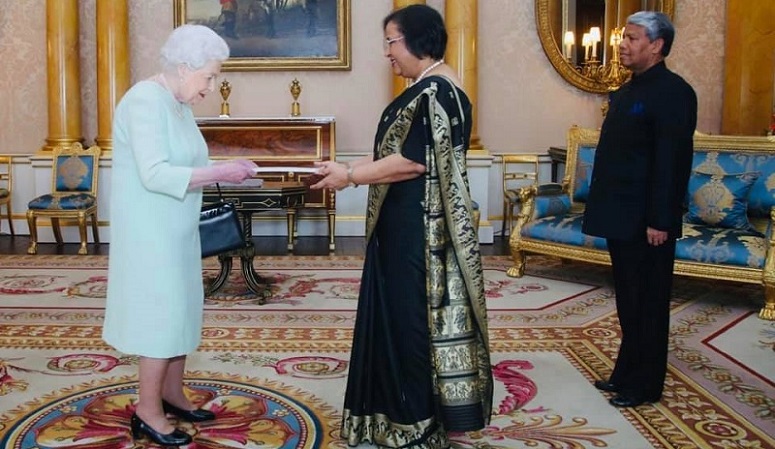 LONDON March 28: Queen Elizabeth II on Wednesday hailed the contribution of the nearly 60,000 Indian doctors employed by the state-funded National Health Service (NHS) during a discussion with the Indian High Commissioner to the UK, Ruchi Ghanashyam.

The 92-year-old monarch received Ghanashyam at Buckingham Palace for the presentation of letters of credence ceremony, which marks the formal launch of a new envoy’s tenure in the UK.

“We had a very good exchange about India-UK relations. Her Majesty received me very warmly.

What will really stay with me is the memory of how easy she makes it for everybody around her,” said Ghanashyam, in reference to her visit to the Palace in a customary horse-drawn carriage, accompanied by her husband A R Ghanashyam.

“We spoke of a number of things that bind us together, most of all of course the vibrant Indian diaspora.

I mentioned to Her Majesty about a healthcare event that was held in Birmingham last week where I learnt of the almost 60,000 Indian doctors in the UK’s NHS and she fondly said, she couldn’t think of what the NHS would do without them,” she said.

Indian doctors are often referred to as the backbone of the UK’s health service, with doctors from outside the European Union (EU) being removed from a visa category last year to allow the UK to bring in more doctors from countries like India to address staff shortages.

The India-UK healthcare event in Birmingham last week also addressed the issue of greater workforce collaboration between the two countries.

Ghanashyam arrived in Britain late last year and this week marked the first big milestone for her new posting.

“India’s relationship with the UK is very long standing and comes with some historical complexity.

But the contemporary relationship is a very modern one, littered with shared interests, said Vice-Marshal Neil Holland, who accompanied the Indian High Commissioner on her ride to the palace as the UK’s Director of Protocol. – PTI