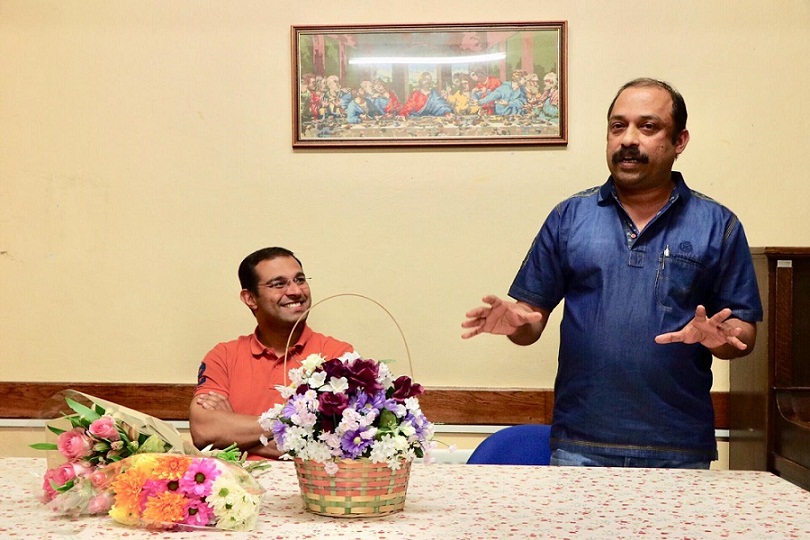 By A Staff Reporter (Pictures By Anup John)

GILLINGHAM (Kent) Oct 14: Angamaly MLA Roji M John, who is on a visit to the UK was accorded a warm welcome by Malayalees in Medway on Saturday Oct 12, 2019 at the St Augustine’s Church Hall, Rock Avenue, Gillingham, Kent. Roji was welcomed by Jomon (Mathew) from the Medway Malayalee community. In his welcome speech Jomon ensured that he did not take any sides with any political parties and tried his hard to say few good words about the Congress party, which Roji M John represents, in order to respect the visiting MLA.

Roji addressed the attendees with making it clear at the outset that he will not be talking politics. He acknowledged the contributions made by NRIs worldwide in the betterment of Kerala. Roji took questions from the audience where Roji, the politician provided them with all seriousness. On a question raised by one of the attendees about the internal politics prevailing in Indian politics he became vocal with stating that politics and foul play is seen in all areas of life including work place. “It is how you deal with it or overcome it is how one succeeds”, he said. He called upon graduates and those with higher qualifications to enter politics so that they could play greater role in building the country and bringing on big changes in the political structure of India and cleanse any bad image politics has in India.

He also lamented about how media plays a big role in bureaucracy and politics in Kerala to shape othe opinion of the public. He gave an example where during the last floods two IAS officers from Thiruvananthapuram and Kollam were the apple of the eye of the public and social media when those IAS officers and other government officers from areas where the floods were affected who worked to their hilt were never mentioned or applauded anywhere publically. He said PR agencies have taken over the system as a whole.

On a question on why political parties still have senior citizens those who dont pave way for younger generation to come up he said that there are ongoing efforts being made from his side and from similar colleagues from all parties striving to bring about changes and it has started to show off. The informal gathering ended with tea and snack served by hosts Rincy Robert and family from Gillingham in Kent.

Roji is from Ernakulam and was elected as a member of the Legislative Assembly of Kerala from Angamaly in 2016. Roji has also served as the president of the NSUI, the National students wing of The Indian National Congress.

Roji M. John born as the son of Mullanmadakkal John hails from Ayiroor in Angamaly near Ernakulam. After completing his basic education, Roji joined the Sacred Hearts College Kochi for higher studies.

Roji M John became an integral part of the KSU during his studies in the college.

Being a good orator and organizer, he became popular among the students. Elected as the Chairman of S H College Thevera Ernakulam in 2001, he tried to utilize the gifted time to arrange innovative programmes. After his bachelor’s degree, Roji shifted to Hyderabad for his masters degree at University of Hyderabad and then to Delhi and was elected as the councilor of JNU Students union Delhi in 2005.

For his active work in student’s political secured him the JNU NSI secretary post in 2006. He was further elected as the JNU SNUI Vice president in 2008.

Roji was in charge of volunteering various organizational activities for the NSUI. In 2009, Roji was appointed as the member of Central Election Authority of NSUI. While in NSUI, Roji was given the task of conducting organisational elections in several states.

His first assignment in Chhattisgarh was a great success which initiated the leadership to grand him more responsibilities. Taking charge as the National Vice President of the NSUI in 2011, he was in charge of the Organisational Elections and Unit Management.

On 6 August 2014, Roji was elected as the national president of National Students Union of India , the student wing of the Congress. He also became the first person to be elected to the post after Rahul Gandhi introduced the system of election of office bearers.

In 2016 Roji was elected as a member of the Legislative Assembly of Kerala from Angamaly.