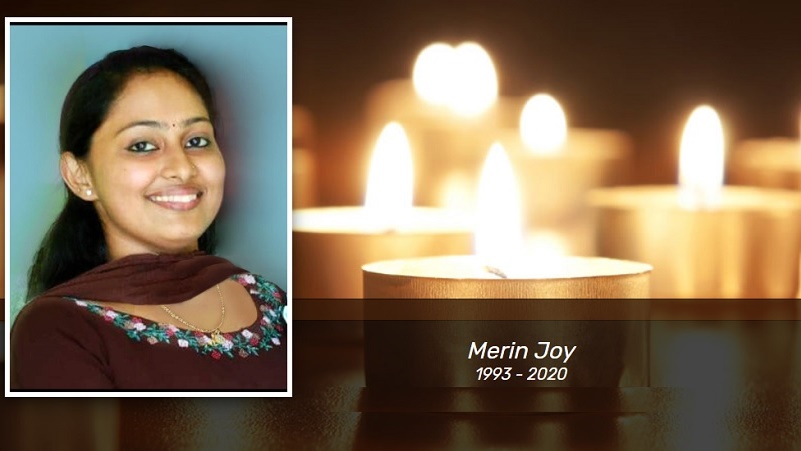 FLORIDA Aug 5: Merin Joy, the US Malayalee nurse, who got brutally murdered by her estranged husband will finally be taken to her final resting place at Hillsboro Memorial Gardens Cemetery Brandon, Florida on Wednesday 5th August 2020.

The body will be laid to the public to pay their last respects at the Sacred Heart Knanaya Catholic Church-3920 South Kings Avenue Brandon prior to the burial.

While the funeral proceedings will be taking place in the US, back in Kerala, in Merin’s hometown a special mass will be held at the Monipally Sacred Heart Church at 5pm where all her close family members will be attending.

Merin’s parents and her two year old daughter Norah and sister will watch the proceedings happening in the US through an online telecast via Knanaya Voice TV.

According to police and media reports from the US, Merin Joy, a nurses working at the Broward Health Coral Springs, Florida, was murdered by her husband Philip Mathew on 28th July 2020 and was arrested following the incident and remains in police custody in the US.

According to police, Philip encountered Merin in the parking area and stabbed her repeatedly and then ran her over with his car. Merin died in the ambulance on the way to a trauma center, but not before revealing the name of her attacker.

The declaration was captured on a police body worn camera. Philip was arrested at a hotel with self-inflicted cuts on his arms.

The US Malayalee diaspora was shocked to come across such a gruesome end to a young nurse who travelled to make a living. The Keralites in the US picked up from where Merin ended to ensure her dream of bringing up her two-year-old daughter.

The Knanaya Catholic Congress of North America (KCCNA) joined hands with FOKANA, FOMAA and Indian Nurses Association of South Florida, to contribute towards an Educational Trust Fund for Merin’s daughter Norah Philip through a Gofundme campaign.

The grouping decided to establish a safety net for Norah as her mother was murdered and father is in police custody for her mother’s murder. They have set up an Educational Trust Fund which will be created and managed by Merin’s family.

All proceeds from this Trust will be used for Norah’s educational endeavors, unforeseen expenses, and to support Norah in her future to accomplish the hopes and dreams Merin had for her daughter.

Those who wish to contribute can use the link below