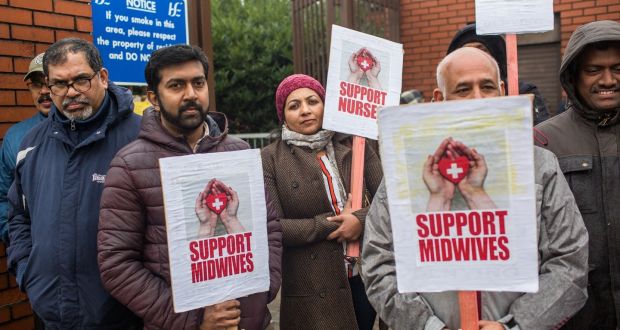 IRELAND Jan 26: The Irish health service has lost much of its appeal as a destination for foreign healthcare professionals due to the gulf in pay and living costs, a group representing the Indian community has said.

Reports in Irish Times said that about 50 members of Kranthi, the Indian cultural organisation, took part in three demonstrations outside Irish hospitals in solidarity with fellow nurses currently locked in industrial dispute.

They say about half of the Indian community in Ireland, of which there are thousands, work in the healthcare sector, many as nurses.

“Most of our members are in these unions,” said Varghese Joy, referring to both the Irish Nurses and Midwives Organisation (INMO) and the Psychiatric Nurses Association (PNA), both of which are planning industrial action next week.

“If you look at the living costs in Dublin for a young couple it’s almost impossible for them to pay their bills and the rents are so high.”

He said its members in Cork have also reported recent rises in the price of accommodation.

“So there is a strong feeling that there should be some kind of salary increase.”

However, he says, the appeal of the country to those studying medicine and healthcare at home in India has been less pronounced in recent years.

“I don’t think it’s the number one destination now. I can see people back home now considering going to the UK or Australia. ”

Mr Joy said he was unsure of the exact number of Indians now living in Ireland but said census data had shown Malayalam, spoken in the southern Indian state of Kerala, was the fourth most common Asian language in the country.