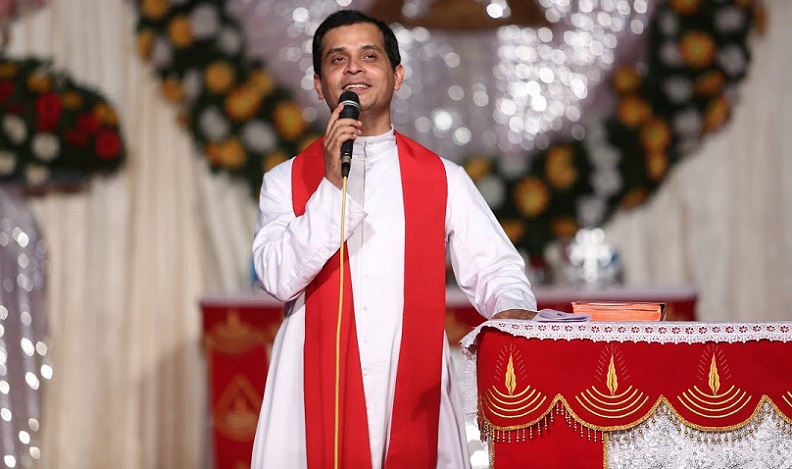 By David Gee for Friendly Atheist

A Malayalee priest is going to be disinvited from his trip to Ireland after he compared autistic kids to animals and claimed to have “cured” several of them.

Dominic Valanmahal, a Catholic priest from the state of Kerala, generated outrage after he delivered a sermon in which he blamed parents for autistic children, whom he compared to animals.

He also made vague and mysterious claims about a “cure.” (To be clear, doctors don’t know what causes autism, and many parents of autistic children would tell you it’s not something that needs to be cured.)

“Why does this generation have autism and hyperactivity? That is to say, mentally retarded children are in abundance,” Fr Valanmahal asked in a sermon.

The priest has also claimed that on previous visits to Ireland, he “cured” one such child in Dublin. He “stood in the middle of the house and said ‘In the name of Jesus, I command, I bind the spirit of autism and hyperactivity that has infested this house. I banish it. Banish it to the foot of Jesus’s cross’,” he said.

On another visit to Ireland, he claimed to have “cured” a child in Limerick. “They bring this child. Praise the Lord. The child was cured 100 per cent. I gave the child Holy Communion. Now the child studies in a normal school. Not only that child, but her younger siblings were also touched by the messiah,” he said.

No wonder a Change.org petition was started, asking the Catholic Church in Ireland to cancel his visit. The creator of that survey declared “victory” after Dublin Archbishop Diarmuid Martin, who oversees the church Valanmahal was scheduled to speak at, said the request should be taken off the table.

On Thursday morning, a spokeswoman for Archbishop Martin, who has jurisdiction over the church in the Dublin archdiocese, said he had been in contact with the Syro-Malabar community “and told them that Fr Dominic Valanmahal should not be invited here.”

It’s not a victory yet. While Martin made a request for Valanmahal not to appear, it’s not like government officials instituted a ban as they did with hate-preacher Steven Anderson last month. There is, however, a separate petition calling for the government to do exactly that.

But at least a Church leader in Ireland is indicating he wants nothing to do with Valanmahal. When a Catholic archbishop says you’re too toxic for the Church, it’s never a good sign. Courtesy Friendly Atheist.