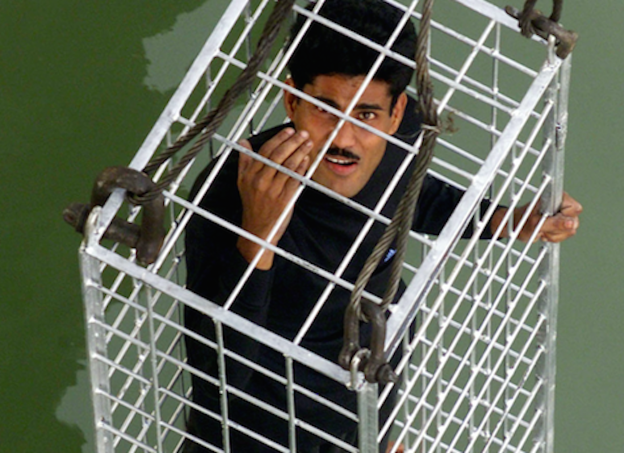 BENGAL June 17: An Indian magician is feared dead after attempting to recreate a stunt made famous by Harry Houdini. Chanchal Lahiri, also known as “Wizard Mandrake”, jumped into the Hooghly river in West Bengal state tied in steel chains and rope.

He was supposed to escape his shackles while underwater then swim to safety, but he did not resurface.

Spectators who gathered to watch Mr Lahiri perform the trick on Sunday alerted the police, who say they are searching for him.

He had been lowered into the river from a boat, bound with six locks and a chain as a crowd on two other boats looked on.

A crowd also gathered on the shore and on Howrah Bridge in Kolkata.

Police and a diving team have searched the area since he went under but have been unable to locate him.

Eyewitness Jayant Shaw, a photographer with a local newspaper, told the BBC he spoke to Mr Lahiri before the trick began.

“I asked him why he risked his life for magic,” said Mr Shaw.

He said the magician told him he wanted to perform the trick to “revive interest in magic”.

French high wire artist Philippe Petit walked across a tightrope suspended between the World Trade Center’s Twin Towers — that stood around 200 feet (61 meters) apart — in New York City, New York, U.S., on Aug. 7, 1974. This feat was performed 1,350 feet (400 meters) above the ground and lasted 45 minutes. Without a safety net and using a balancing pole, he made eight passes along the wire.

Mr Lahiri has successfully performed underwater tricks on other occasions – 20 years ago he emerged from a glass box after being lowered into the same river.

Mr Shaw said: “I never thought he would not come out of the water this time.”