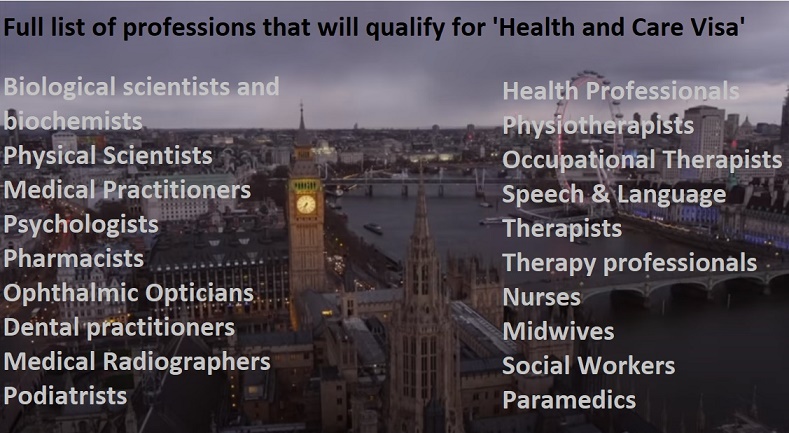 LONDON July 14: The UK government on Monday laid out further details of its new post-Brexit points-based immigration system to come into force from January 1 next year, described as a “fairer, firmer, skills-led” regime that would treat nationals of all countries at par – a move welcomed by Indian industry.UK Home Secretary Priti Patel, who had announced the new system earlier this year, confirmed in a written ministerial statement in the House of Commons that a new Health and Care Visa and post-study work visa will be part of the new system.

“The British people voted to take back control of our borders and introduce a new points-based immigration system,” she said.

“Now we have left the EU, we are free to unleash this country’s full potential and implement the changes we need to restore trust in the immigration system and deliver a new fairer, firmer, skills-led system from 1 January 2021. Britain is open for business and ready to welcome the best and brightest global talent,” she said.

The ongoing Brexit transition period concludes at the end of December this year, when the UK will no longer be part of the European Union (EU) free movement of people rules.

Under the British government’s plan, those wishing to live and work in the UK from January 1, 2021, must gain 70 points, awarded for meeting criteria such as having a job offer, holding a PhD relevant to the job, speaking English or earning more than 22,000 pounds a year.

Those with job offers in “shortage occupations”, such as nursing and civil engineering, would be able to earn extra points.

“Indian businesses welcome the UK’s new points-based immigration. It’s positive that the UK is seeking to attract highly-skilled nationals from across the world, regardless of nationality,” said Jim Bligh, Chair of the Confederation of Indian Industry (CII) UK India Business Forum.

“Across all sectors, Indian businesses bring in highly skilled nationals from around the world to help UK plc grow and compete. From high tech to haute cuisine, engineering to drug design, a smooth, skills-focused immigration system should help Indian companies across the economy to flourish in Britain in the years ahead,” he said.

According to the UK Home Office, the further detail being published this week will give employers the time to prepare as the new immigration system is implemented in phases to ensure smooth delivery.

A new Health and Care Visa for key health professionals, including from India, will make it easier and cheaper for health professionals to work in the UK, ensuring the state-funded National Health Service (NHS) has continued access to the top global talent.

The new “fast-track” visa was previously referred to by UK Prime Minister Boris Johnson as the NHS Visa.

“This will make it easier and quicker for talented global health professionals to work in our brilliant NHS and in eligible occupations in the social care sector. The visa fee will be reduced and health professionals applying can expect a decision on whether they can work in the UK within just three weeks, following biometric enrolment,” notes Patel, in a written statement to Parliament.

Also, in recognition of a long-standing demand of Indian-origin doctors and healthcare professionals in the UK, these healthcare workers will be exempt from the annual Immigration Health Surcharge.

“We will exempt frontline workers in the health and social care sector and wider health workers from the requirement to pay the Immigration Health Surcharge,” adds the Indian-origin Cabinet minister.

A new Graduate Route, already announced to commence from 2021, will allow international students to stay in the UK once they have successfully completed their studies.

Overseas students, including Indians, who have completed undergraduate and master’s degrees will be able to stay for two years and those who have completed PhD can stay for three years, making it easier for some of the “best, international graduates to secure skilled jobs in the UK and contribute to the UK’s economic growth”.

The new points-based system will also expand the skills threshold for skilled workers and an applicant’s job must be at the minimum skill level of A-level or equivalent, rather than degree level under the current system.

“This will provide greater flexibility and ensure UK business has access to a wide pool of skilled workers,” the Home Office said.

Many of the announcements around the new system have been made in the course of the past few months, with the formal guidance around the changed rules to apply from New Year’s Day 2021 being laid out this week.

EU nationals resident in the UK until the end of this year can apply for permanent residency under the EU Settlement Scheme, with any future entries for work and stay in the UK being subject to the new points-based visa rules like the rest of the world.