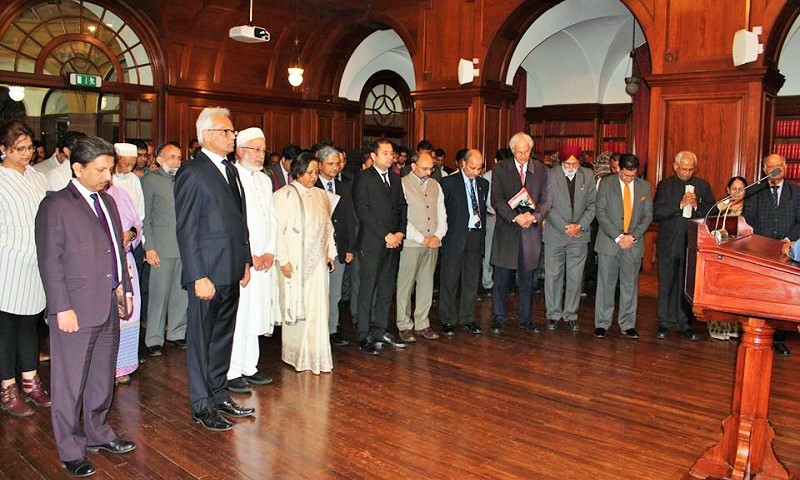 LONDON Feb 23: A solemn event was held at the High Commission of India to pay homage to the martyrs of Pulwama terror attack and express solidarity with their families.

Representative of different faiths of the Indian community gathered and observed silence for two minutes.

High Commissioner, Mrs Ruchi Ghanashyam called upon all gathered to take pledge to pursue interests of our motherland in earnest. According to reports, protests against Pakistan over the brutal Pulwama attack have spread across the world, with nearly 50 countries condemning the nefarious act carried out by banned Pakistani terror organisation Jaish-e-Mohammed in Jammu and Kashmir that killed 40 Central Reserve Police Force jawans on February 14.

Indians living abroad have taken to streets, the latest development coming from the United Kingdom. Hundreds of non-resident Indians in Britain protested outside the Pakistan High Commission in London last Saturday.

Indian communities across the United States also have been holding protest marches denouncing the role of Pakistan in the terror attack. More than a hundred US-based Indians protested outside the Pakistan consulate in New York on Friday.

Meanwhile adding pressure to Pakistan, the Paris-based Financial Action Task Force (FATF) on Friday retained Pakistan on its “grey list”, saying Islamabad had made only “limited progress” in curbing terror financing and failed to grasp the risks posed by groups such as the Lashkar-e-Taiba, and Jaish-e-Mohammed (JeM), which has claimed responsibility of the Pulwama terror attack.

The action by the global terror financing watchdog, which is a relief to India, came a day after the UN Security Council, in a statement, condemned the 14 February suicide attack in Pulwama that killed about 40 Central Reserve Police Force (CRPF) personnel. The UNSC also named the Pakistan-based JeM in the statement.

Tensions between India and Pakistan have been running high since the Pulwama terror attack, with the Pakistani army on Friday warning it will respond to any Indian reprisal with “full force”, according to Reuters news agency.