NEW DELHI June 25: The repatriation process of stranded Indians from across the globe has been underway for a long time now. The DGCA earlier had also tweeted a list of airlines and their operations which showed that dozens of flights were being operated under the Vande Bharat mission.

In order to facilitate smooth functioning of the process the Government of India on Wednesday, June 24 released the revised standard operating procedure (SOP) for operating chartered flights used for repatriation of stranded Indians.

The process will be as follows:

1) The chartering entity (Community Association/Company/Group etc) in Kuwait has to identify an Air Transport Operator (ATO) and provide details of passengers, destination and manifest, to the Embassy of India in Kuwait for examination and processing of Embassy’s No Objection.

4) ATO will obtain the state government’s written clearance for the flight and Embassy’s No Objection on the manifest. ATO will then contact Directorate General of Civil Aviation for flight clearance.

5) Prior to the actual departure of the flight, ATO must send the final passenger manifest to the Embassy of India in Kuwait, as well as to the concerned state government.

6) The format of the manifest remains the same as shared earlier.

7) Contact details of the state coordinators/nodal officers will be shared with ATOs by the Embassy. 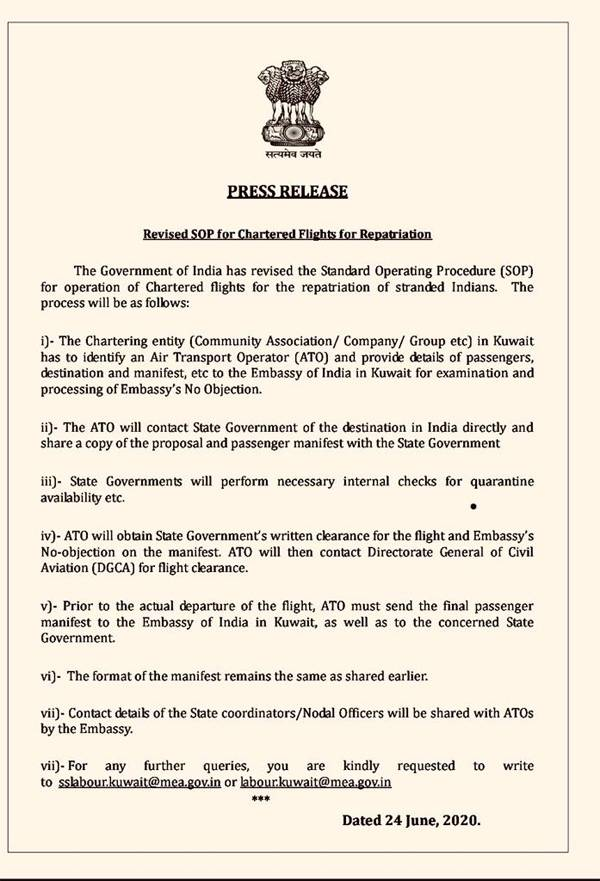 For further queries, concerned are requested to write to 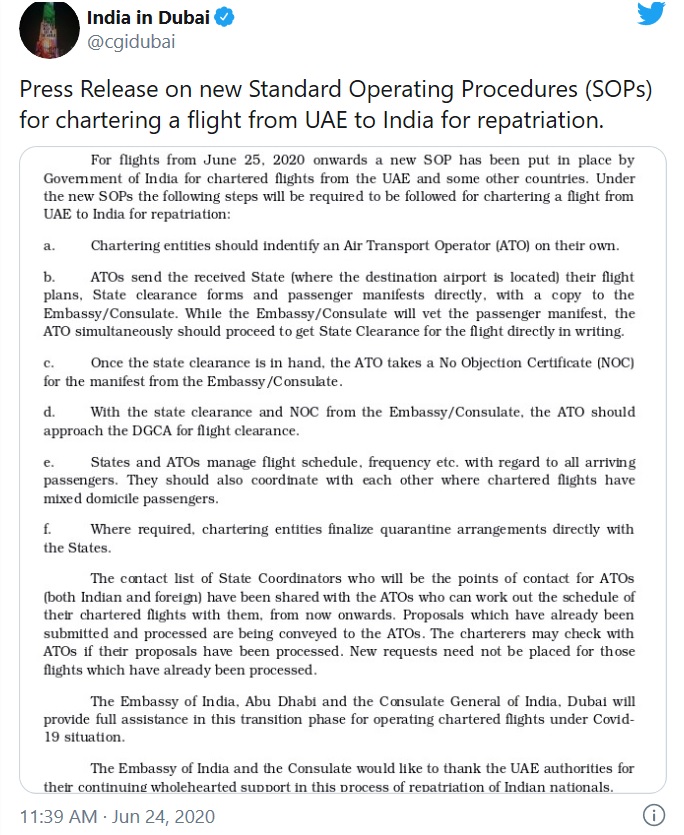 A Division Bench of the Kerala High Court on Monday directed the Central government to produce the files relating to the standard operating procedure (SOP) issued by the Union Ministry of Civil Aviation for operating chartered flights to bring back expatriates.

When the petition came up for hearing, counsel for the Central government submitted that the chartered flights had to be operated in accordance with the SOP issued by the Centre as well as the State government.

The State government had submitted it was insisting on COVID-19 test for those returning by chartered flights from Gulf counties on the basis of the SOP issued by the Civil Aviation Ministry.

The government argued that it issued the directive as there was every possibility of transmission of the disease during flight.

There would be heightened chances for transmission of COVID-19 during the four to six-hour-long flights when COVID-free and COVID-afflicted persons travel together.

The court posted the petition for further hearing on June 29.