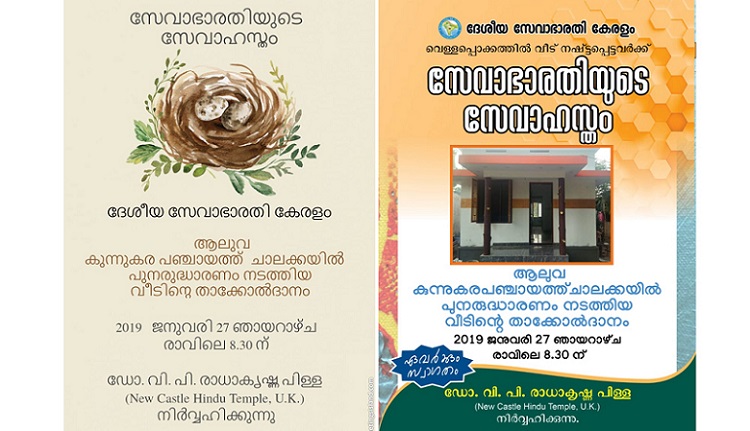 LONDON Jan 30: Kunnukara panchayat in Ernakulam was among the worst-hit areas in the floods that hit Kerala in August 2018. The panchayath lost six lives and suffered huge damage in the forms of damaged houses, buildings, 256 houses were completely damaged while 925 houses suffered partial damage and loss of around 500 cows and 2,000 cattle.

The news of the floods reached wide and far and helping hands surfaced from all parts of the world. The attendees of the Newcastle Hindu Temple in the United Kingdom too decided to work towards offering solace to those unfortunate victims of the floods.

The Hindu community in Newcastle through Hindu Temple Newcastle raised over £55,000 to help the people of Kerala to rebuild their lives after the catastrophic floods of 2018.

Dr VP Radhakrishna Pillai and Geetha Pillai liaised with those affected in Kerala and kept the Hindu community in Newcastle informed. The first house was handed over to one of the victims who lost their house in the floods.

The money raised is going towards projects such as schools, people making their homes and businesses again and many other good causes.

The charity is coordinated in Kerala by Sevabharathi, an All India Voluntary Social Service Organization, committed to National unity, Integration and Self Reliance. As of today, Sevabharathi kerala running their projects in the areas Like Education, Health, Agriculture &Environment, Self reliance, Social Welfare, Disaster Management etc.

The relief work carried out by sevabharathi in the last three decades, when different parts of the country were ravaged by natural calamities like flood, drought, earthquake & tsunami, etc. timely activities by sevabharathi volunteers had won wide acclaim.