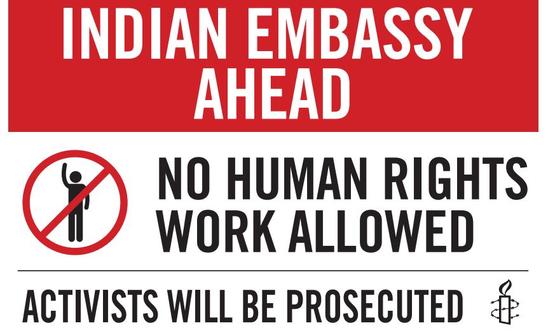 The raid followed a similar attempt to intimidate Greenpeace India, with the environmental group’s bank accounts also frozen, as the Indian government claimed violations of foreign funding regulations to shut down another prominent non-governmental organisation.

Soon after the raid on Amnesty, a smear campaign was launched on social media and among pro-government sections of the media that have long opposed Amnesty India’s human rights work.

“Indian Embassy ahead: No human rights work allowed. Activists will be prosecuted”

“Warning: All human rights work will be reported to Prime Minister Narendra Modi. Proceed at your own risk”, and

“You are approaching the Indian Embassy. Danger ahead for human rights workers”.

“Amnesty India speaks out for women’s rights, has exposed the use of excessive force against defenceless people, and stood up for indigenous communities whose rights are being violated by large corporations.

“We stand in solidarity with our colleagues in India and are calling on Prime Minister Modi to immediately stop these attempts to punish them for their brave work.”