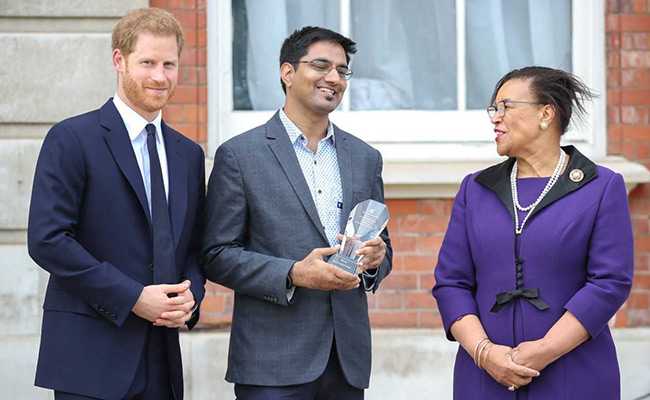 LONDON July 19: An Indian engineer whose low-cost neonatal breathing device has saved the lives of new-born babies across small towns of India, has won the 2019 Commonwealth Secretary-General”s Innovation for Sustainable Development Award in London.

Nitesh Kumar Jangir, who created Saans as a breathing support device to tackle avoidable deaths of premature babies from respiratory distress syndrome due to a lack of immediate access to complex medical equipment, received his award in the “People” category alongside 14 other innovators from across the 53 member-countries of the Commonwealth.

“Our mission is to try and ensure that babies don’t lose their lives due to the lack of access to a piece of technology,” said Jangir, who was presented the award at a ceremony in London last week by Prince Harry – the Youth Ambassador of the Commonwealth, and Commonwealth Secretary-General Baroness Patricia Scotland.

“In countries like India, with erratic electricity supply and limited resources at public hospitals, this neonatal breathing support equipment can be used without any complex training. So, anyone, anywhere can use this device and deliver crucial support to premature babies,” he explained.

The Bangalore-based electronics engineer is the co-founder of Coeo Labs, a medical device company with a vision to prevent preventable deaths in the field of emergency and critical care.

Saans, which has been in circulation for the past three months across district hospitals of India that lack neonatal ICU facilities as well as at medical colleges, has been in development for four years.

It is the world’s first neonatal Continuous Positive Airway Pressure (CPAP) device that can be powered in multiple ways – through direct source electricity, including a vehicle”s electrical supply, a rechargeable battery, compressed gas, or even manual air pumping.

“While this device is low-cost, at least three times cheaper than any other such machine, we had to ensure that it was of high quality. This award will go a long way in upscaling this device across the Commonwealth countries, for use in similar conditions in regions like Africa,” he said.

Each of the 15 winners of the inaugural Commonwealth Innovation Awards receive a trophy, a certificate and 2,000 pounds in prize money.

“By showcasing the contribution their innovations are making towards building a better world, these awards will help our hitherto unsung heroes win that crucial next round of support, mentoring and investment they need to scale up and fulfil their dreams.

Equally, these awards are intended to inspire the incredibly youthful population of Commonwealth countries to dream big and believe that no problem is too big to solve through innovation,” he said.

The awards are divided along five thematic categories – improving the lives of People; boosting prosperity; protecting the planet, promoting peace; and building partnerships for development in the Commonwealth.

The selection process was based on the impact or potential of the innovations to advance one or more of the 17 Sustainable Development Goals in Commonwealth countries and some of the other winners came from countries in the Caribbean and Africa and from Australia and Canada.