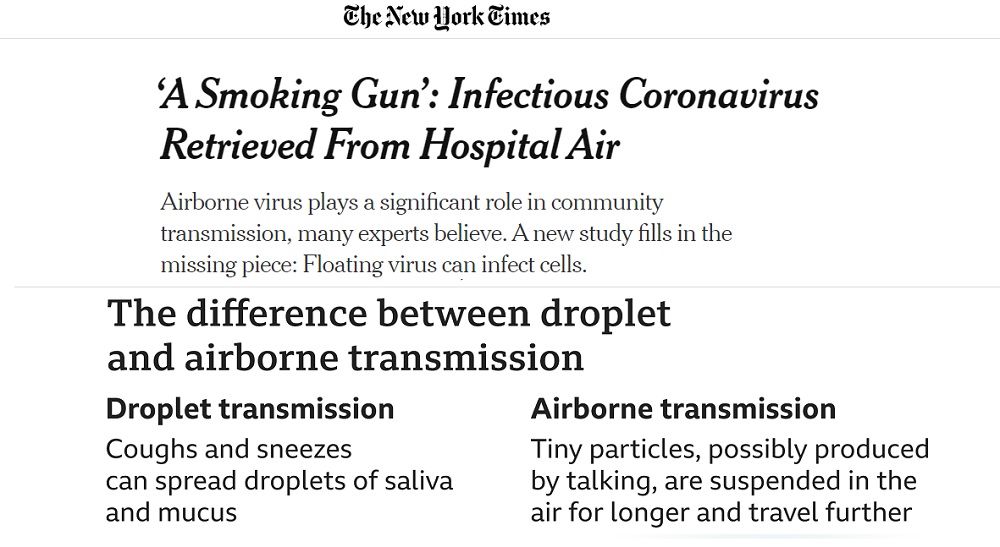 “This is what people have been clamoring for,” said Linsey Marr, an expert in airborne spread of viruses who was not involved in the work. “It’s unambiguous evidence that there is infectious virus in aerosols.”

A new study from the University of Florida has confirmed that these droplets don’t just contain bits of genetic material, but are actually infectious.

Air samples collected from a hospital room found contagious virus particles between seven feet and 16 feet away from patients lying in their beds.

The latter is much greater distance than the six feet guidelines recommended by public health experts to help prevent the spread of COVID-19.

Up until recently, the World Health Organization (WHO) claimed aerosol transmission of coronavirus was only possible in hospitals during medical procedures with nebulizers and suctioning.

Last month, the WHO formally recognized that SARS-CoV-2, the official name of the virus, can be carried by aerosols.

But there are still many experts, among agencies such as the US Centers for Disease Control and Prevention and Public Health England, who have downplayed the role of aerosols and focused on droplets spread via coughing and sneezing.

Aerosol spread occurs when respiratory droplets produce tiny particles, measuring less than five micrometers, which is smaller than a particle of pollen.

These aerosols can be inhaled, and if enough are, have the ability to cause infection.

This method is more dangerous in terms of transmission than respiratory droplets, but can be lessened by avoiding crowded indoor spaces.

For the study, published on the pre-print site medRxiv.org, the team collected air samples from the room of two coronavirus patients at the University of Florida Health Shands Hospital.

One of the patients had an active infection and neither underwent medical procedures that the WHO claims are the primary drivers of aerosol transmission.

What’s more, the room had been previously outfitted with safety measures such as six air changes per hour and ultraviolet lights.

Researchers used viable virus aerosol samplers, which enlarged aerosolized virus particles to capture them, and then tested them.

Tests showed that viable virus capable of infection was found in samples collected between seven and 16 feet (two to 4.8 meters) away from patients.