LONDON Feb 24: Union of UK Malayalee Associations (UUKMA), an umbrella organisation for the expatriates of Kerala in the United Kingdom, has condemned in unequivocal terms about the irresponsible efforts by certain communal groups and media in the UK to sensationalise the ongoing farmers protest and to create communal tension in the UK.

In a press note issued to this website it said: “The farmers protest in India is NOT a communal issue but part of its democracy. Indians cutting across religious or regional identities are supporting or are opposing the agriculture reform laws enacted by the Indian parliament.

“Indians settled in the UK have been enjoying strong traditional inter-community relationship and enjoys their right to exercise their democratic rights independently and respectfully as well. We urge media and all community organisations in the UK to refrain from inflammatory statements and activities that can damage inter-community harmony in the UK”, the note said. 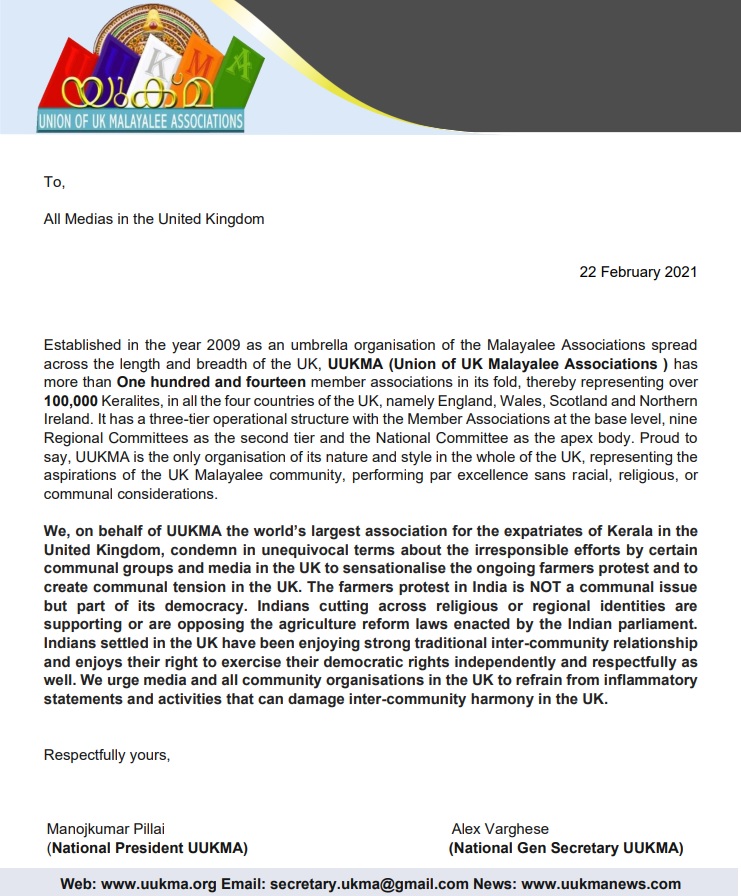 It has more than 114 member associations in its fold, thereby representing over 100,000 Keralites, in all the four countries of the UK, namely England, Wales, Scotland and Northern Ireland.

It has a three-tier operational structure with the Member Associations at the base level, nine Regional Committees as the second tier and the National Committee as the apex body.

UUKMA prides itself being the only organisation of its nature and style in the whole of the UK, representing the aspirations of the UK Malayalee community, performing par excellence sans racial, religious, or communal considerations.