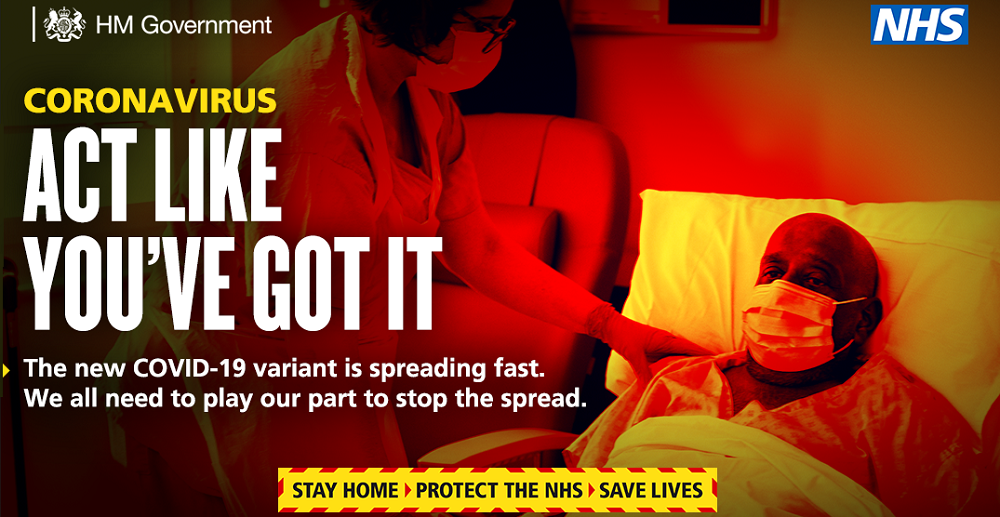 LONDON Jan 9: The UK government on Saturday began rolling out a series of stark advertisements as part of a new awareness drive that warns people to “Act like you’ve got it” because anyone can spread coronavirus, especially the new highly transmissible variant that has seen hospitals being overwhelmed with COVID-19 patients.

The campaign – made up of television, radio and newspaper adverts as well as a social media blitz – comes as the latest daily death count from the deadly virus hit a new peak of 1,325 deaths and infections rose to 68,053 cases. Around one in three people infected with the virus do not have any symptoms and could therefore be passing it on without realising, according to the government’s messaging.

UK Prime Minister Boris Johnson took to social media to urge people to strictly follow the stay-at-home lockdown as the disease continues to spread at an “alarming rate”.

“Our hospitals are under more pressure than at any other time since the start of the pandemic, and infection rates continue to soar at an alarming rate,” Johnson said in a Twitter statement.

“The vaccine rollout has given us renewed hope, but it’s critical for now we stay at home, protect the NHS and save lives,” he said.

The warnings come a day after London Mayor Sadiq Khan declared a “major incident” in the UK capital because the coronavirus cases are “out of control” as latest figures revealed the infection rate in London has exceeded 1,000 per 100,000 people, with hospitals over-capacity with patients.

A major incident is defined as an event or situation with a range of serious consequences, which requires special arrangements to be implemented by one or more emergency responder agencies.

“The announcement that London has declared a major incident in the battle against coronavirus is a stark reminder of the critical point we are at,” said Deputy Assistant Commissioner Matt Twist, who leads the Metropolitan Police’s response to the COVID pandemic, as he reiterated a call for people to “stick to the rules”.

“I know Londoners will be shocked that officers are still dealing with a small selfish minority who think the rules don’t apply to them by holding house parties, large warehouse raves or other gatherings. These are creating breeding grounds for the much more transmissible variant,” he said.

“These rule breakers cannot continue to feign ignorance of the risk that this virus poses or listen to the false information and lies that some promote downplaying the dangers. Every time the virus spreads it increases the risk of someone needlessly losing their life,” he added.

UK Health Secretary Matt Hancock also issued a plea to “pull together for one final push”.

“I know how much we have all sacrificed already, but the new variant has significantly changed the current landscape and we absolutely cannot let up now,” he said.

England, much of Scotland, Wales and Northern Ireland continue to be under strict national lockdown measures, with stay-at-home orders in place for most people. The rules require people to be outdoors only for very limited reasons of one form of daily exercise, essential shopping or medical needs. Schools have been closed and moved on to remote learning, with the current rules likely to be in place at least until next month.